NOVI, Mich. (FOX 2) - The battle over Michigan's votes in the upcoming election continued Tuesday with President Donald Trump's son stumping in metro Detroit for the Republican nominee. During a speech in Novi, Eric Trump guaranteed a victory in the race for the White House.

"We are going to win Michigan, make no mistake about it," he said to a crowd at the Suburban Collection Showplace.

Eric Trump campaigns ahead of election in Novi

The battle over Michigan's votes in the upcoming election continued Tuesday with President Donald Trump's son Eric Trump stumping in metro Detroit for the Republican nominee.

The event was moved from the Huron Valley Gun shop, where one of the defendants in the Gov. Gretchen Whitmer's kidnapping plot used to work. Even though the thwarted plot has caused even more contention among President Trump and Gov. Whitmer, Eric Trump still addressed it at the rally.

"Throw then into jail for a very long time, I think that would be a very great service to this country," he said.

"I'm not on the ticket. I don't like most politicians, right. But I love one and I love this nation and you see the excitement out there and it's unbelievable," Eric said. "I was in Detroit this morning doing rallies. Some of the support we have in Detroit is unbelievable."

"This, kind of, socialism party on the other side that wants to attack law-enforcement, that wants to raise everybody's taxes, that wants socialized medicine, I'm telling you it's not playing well to the American people. They don't want it."

“No matter where Eric Trump goes in our state, he can’t escape his father’s broken promises and failed leadership. Whether he’s at a gun range or a convention center. ... Here’s the truth: Donald Trump’s failed COVID-19 response has devastated our state, leaving almost 7,000 dead in our state and sending unemployment skyrocketing.”

You can see more remarks from Eric Trump in the video player above. 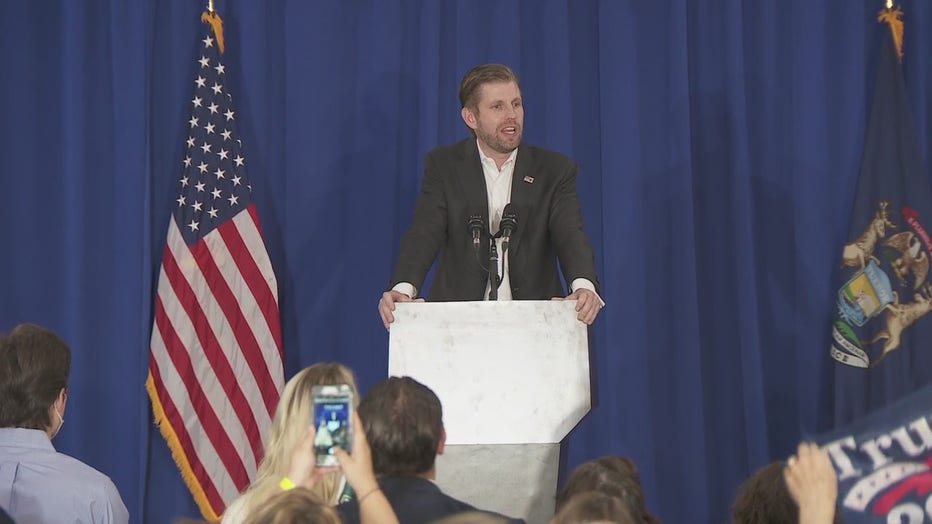 Eric Trump speaks behind a podium on stage at the Suburban Collection Showplace in Novi, Mich. on October 13, 2020.