FOX 2 - The war of words between Republican President Donald Trump and Democratic Gov. Gretchen Whitmer took another turn Thursday with both sides lashing out after a kidnapping plot was foiled by state and federal law enforcement. Whitmer took aim with the Democratic talking point of Trump's refusal to condemn hate groups - thus possibly inspiring extremists - which drew the president's ire.

Democratic presidential nominee Joe Biden entered the fray late tonight to back Whitmer. He said he called the governor - who he once considered for his vice presidential running mate - and that he "was grateful that she and her family are safe," while commending law enforcement in preventing the plot "by emboldened domestic terrorists." 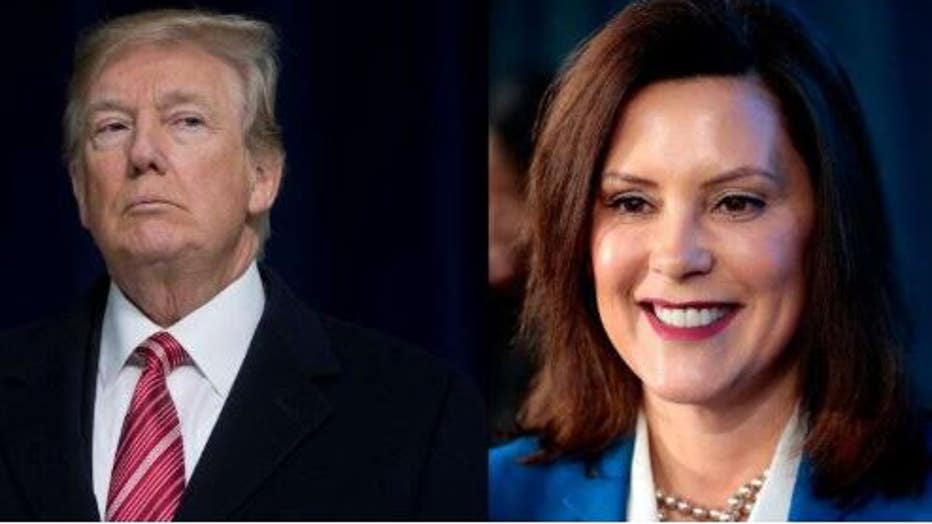 Thirteen men face conspiracy and terrorism charges for their plot to kidnap Whitmer and attempt to overthrow the Michigan government as part of a war on "tyrannical leaders" in what is suspected to be a cooperative effort between militias and extremists before the November election. Elements of the alleged plot included surveillance of Whitmer, a planned trial for abuse of power, and the use of explosives in addition to harming her and attacking the Capitol.

The president went father with his criticism on Twitter saying that "instead of thanking me, she calls me a white supremacist" adding he does not tolerate any extreme violence. Along the way, he took shots at Whitmer's husband's boat controversy from earlier in the lockdown, said she has done a terrible job, and renewed his previous calls to open the state up.

"Governor Whitmer of Michigan has done a terrible job," he wrote. "She locked down her state for everyone, except her husband’s boating activities. The Federal Government provided tremendous help to the Great People of Michigan. My Justice Department and Federal Law Enforcement announced ...

"They foiled a dangerous plot against the Governor of Michigan. Rather than say thank you, she calls me a White Supremacist— while Biden and Democrats refuse to condemn Antifa, Anarchists, looters, and Mobs that burn down Democrat-run cities.

"I do not tolerate ANY extreme violence. Defending ALL Americans, even those who oppose and attack me, is what I will always do as your President! Governor Whitmer — open up your state, open up your schools, and open up your churches!"

"Our head of state has spent the past seven months denying science, ignoring his own health experts stoking distrust, fomenting anger, and giving comfort to those who spread fear and hatred and division," Whitmer said. "Just last week the President of the United States stood before the American people and refused to condemn white supremacists and hate groups like these two Michigan militia groups.

"'Stand back and stand by,' he told them. 'Stand back and stand by.' Hate groups heard the president's words not as a rebuke but as a rallying cry - as a call to action. When our leaders speak, their words matter. They carry weight. When our leaders meet with, encourage, or fraternize with domestic terrorists, they legitimize their actions and they are complicit. When they stoke and contribute to hate speech they are complicit."

Biden backed Whitmer's statement saying tonight that the words of a president matter and that calls by Trump to re-open Michigan have not helped matters in addition to his appealing to radical factions.

"As a nation, we are at a crossroads. We have come to a point where, despite our shock, we are not surprised that such a heinous plot was even conceived - a plot by Americans to blow up a bridge on American soil, threaten the lives of police officers and other law enforcement officials, and kidnap an American leader, take her hostage, and stage a mock trial for treason," Biden wrote. "It’s the kind of twisted plot we expect from ISIS, but now it’s here at home.

"The words of a president matter. They can move markets. They can bring peace. They can bring war. They can heal divisions or incite violence. When Governor Whitmer worked to protect the people of her state from a deadly pandemic and saved countless lives, President Trump issued a call to “LIBERATE MICHIGAN!” That call was heard. When protesters with Swastikas and Confederate flags, nooses, and assault rifles descended on Michigan’s capitol echoing the President’s own refrain to “lock her up,” President Trump called them “very good people.” He was heard, just as he was heard by neo-Nazis in Charlottesville three years ago, and again last week, when he told the extremist Proud Boys to “stand back and stand by.

"There is a throughline from President Trump’s dog whistles and tolerance of hate, vengeance, and lawlessness to plots such as this one. He is giving oxygen to the bigotry and hate we see on the march in our country. We have to stop it. I just spoke a few days ago in Gettysburg about the cost of division in this country and the need to stand up and shut down violence and hate. The moment has come. We need to come together for the country I know, for the country you know. We need to make our voice heard.