No updates from either the prosecutor or the defense came during the hearing in front of Oakland County Judge Kwame Rowe, who has been reviewing Crumbley's custody status monthly. His next appearance will be over Zoom on May 19.

SOUTHFIELD, Mich. (FOX 2) - Accused Oxford High School shooter Ethan Crumbley appeared in front of an Oakland County judge for a pre-trial hearing on Thursday, April 21, where a tentative trial date was set for the teenager charged with killing four students inside the school.

Judge Kwame Rowe set a tentative trial date for September 6, 2022, but stressed that it could be delayed depending on upcoming motions and procedures that happen in court over the next five months.

Crumbley has been charged with 24 counts, including murder and terrorism after he allegedly shot and killed four teens on Nov. 30, 2021. Several other students and a teacher were shot and injured. 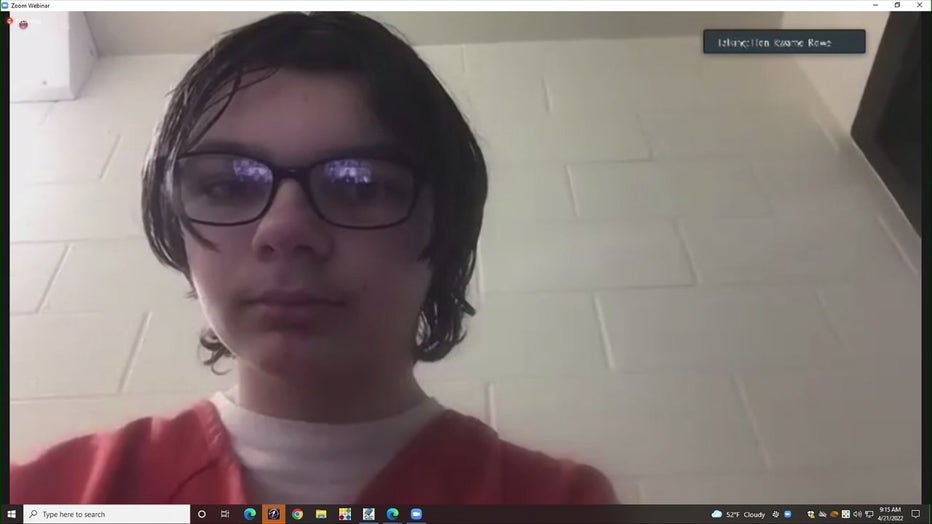 He was in court Thursday for his mandatory monthly review regarding his placement in the adult facility. As a juvenile, it is required by law that the court review if keeping him in the facility is the most appropriate place for him. This review must happen once every 30 days.

The defense did not argue for movement from the Oakland County Jail while the prosecution requested he remain in adult custody, which Judge Rowe granted.

The tentative trial date is set for Sept. 6 at 8:30 a.m. in Judge Rowe's courtroom. Crumbley is due back in court on May 19 for another check regarding his placement in the jail on May 19.

Ethan's trial is tentatively set roughly six weeks before his parents, James and Jennifer, are due for trial on their charges of manslaughter connected to the shooting.

During Thursday's hearing, the education of Ethan was brought up again as options are still being evaluated. This was brought up by Deborah McKelvy, Crumbley's guardian ad litem, in the previous hearing in March.

The Oakland County jail is now responsible for the suspect's education since it has taken over guardianship from his parents.

"Ethan is thinking about the best path, but the earliest would have to be after his 16th birthday," McKelvy said in March. Crumbley's birthday is in April.

The teen could either work toward the equivalency of a high school diploma or a GED as required by the state. The earliest he could resume schooling is for the 2022-23 fall semester.

On Jan. 7, Crumbley was in court for a probable cause conference where he waived his right to a preliminary hearing. By doing so, that sent the case directly to circuit court.

Last week, Crumbley was arraigned in circuit court on the murder and terrorism charges and a not guilty plea was entered on his behalf.

Haunting video was shown in court Thursday of Ethan Crumbley at the shooting range with his mom, Jennifer – practicing, with the same gun used in the Oxford High School shooting.