Tensions were high leading up to the visit of Giuliani. A group of President Trump's supporters huddled outside the entrance, blocking some of the press including FOX 2 from entering - believing this election was stolen. A smaller group supporting Biden opposed the former New York City mayor's visit.

Rudy Giuliani, the attorney for President Donald Trump led the question asking in Lansing Wednesday as witnesses attempted to provide evidence of election fraud specifically at during the ballot counting at TCF.

Sitting before a House oversight committee Giuliani says he has evidence of voter fraud.

Giuliani referred to a binder full of sworn statements by witnesses claiming election fraud in Michigan.

The first witness was Jessy Jacob, a processor working for the Wayne County Elections Department. She told the committee of state reps that she was told by her boss not to reject any ballots even if the address, signature or other details didn't match.

She spoke about one instance where that came into play.

"The signatures were totally different," she said.

Giuliani: "Who did you show that to?"

Giuliani: "He was the boss right?" 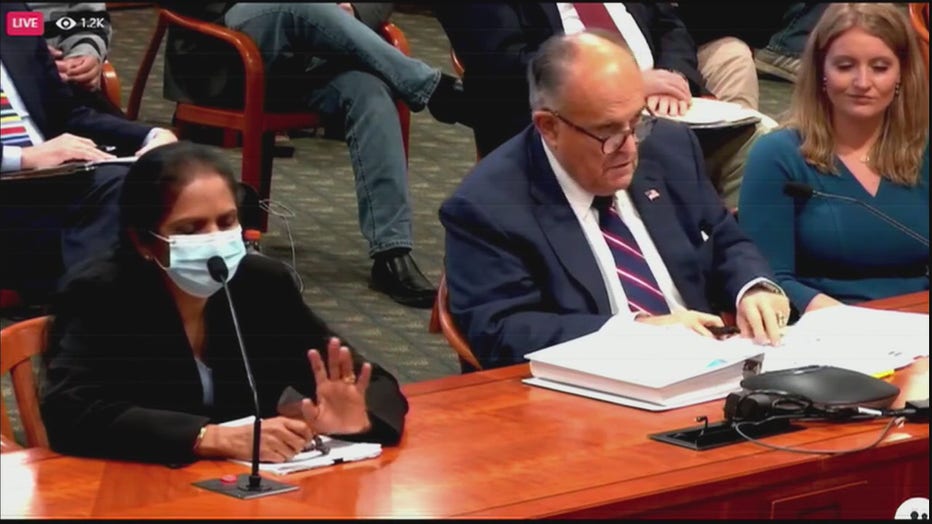 She also told the committee she was harassed at the TCF Center.

"They treated me like a criminal, it was so intimidating," Jacob said.

Another witness, Melissa Carone, was a contracted IT worker assigned to fix any ballot counting machine problems at the TCF Center. Carone says when the Dominion Voter System machines would jam, the votes would be counted repeatedly.

"Counting votes, ballots nine or 10 times," she said, estimating this happened thousands of times over the 27 hours she was at TCF.

Carone said she had signed an affidavit with the same testimony but Democrat State Rep. Darrin Camilleri replied that a Wayne County judge previously ruled her testimony was not credible.

Carone said she has been dealing with harassment and death threats, is now jobless and has had to move because "Democrats will try to ruin your life."

There were numerous claims about Dominion Voter Systems throughout the testimony. Hall said Dominion had been repeatedly asked to testify before the State House, but so far they have not agreed.

"It's hard for me to go off this Dominion theory," said Hall. "But Dominion won't come in and explain it."

This House committee meeting happened just one day after the Senate held a similar meeting hoping to gain a better understanding on claims of fraud and what as lawmakers, they could do about it.

Giuliani said the U.S. Constitution empowers legislatures to appoint electors directly, even though the Legislature passed a law allotting them to the popular vote winner. Biden won the state by 2.8 percentage points. The result was certified by the state's bipartisan election board last week.

The hearing had numerous tense moments including Democrat  Rep. Cynthia A. Johnson (5th District) who at one point yelled "I know these people are lying."

Johnson repeatedly said she wanted to hear from "Detroiters" and that there weren't any "Detroiters" there. Hall ruled her out of order numerous times. 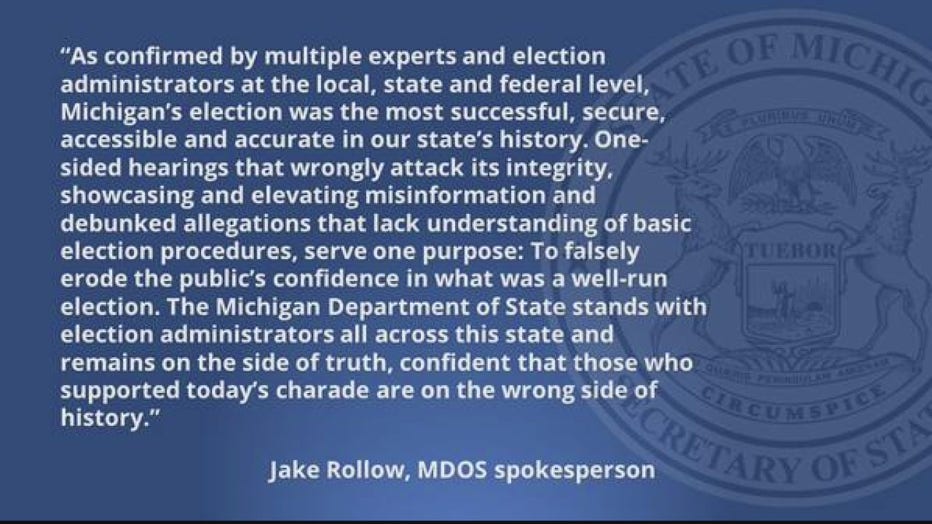 Giuliani has made claims of "massive cheating," particularly by Detroit Democrats, that he said resulted in 500,000 to 700,000 "illegal" votes.

The former mayor blistered the committee at the close of the meeting saying they could take back the power of the electors tonight. GOP legislative leaders have said they will not try to steal electors from Biden.

"It appears your citizens care more about this election than you do, because they are out on the streets," he said to the committee along with outbursts of applause. "The election in Detroit was a disgrace, residents of Michigan should be embarrassed.

"This election was stolen by the mail-in ballots."

Attorney General William Barr has declared the U.S. Justice Department uncovered no evidence of widespread voter fraud that could change the outcome of the 2020 election.