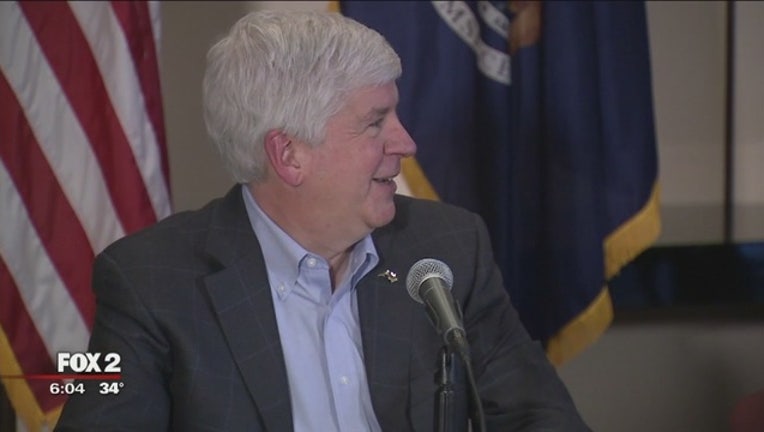 To prevent minimum wage and earned sick time initiatives from going to voters last month, GOP lawmakers approved them in September so they could be more easily altered after the election with simple majority votes rather than the three-fourths support that would have been needed if voters had passed the proposals.

The tactic - never done until now - was pushed by the business community as necessary to avoid jeopardizing the economy. But it was criticized as an unconstitutional attack on voters' will at a time Republicans in Michigan are trying to dilute the powers of incoming elected Democrats.

In another Midwest state, GOP Wisconsin Gov. Scott Walker on Friday signed a sweeping package of legislation that restricts early voting and weakens the Democratic governor and attorney general.

Michigan's Snyder signed the bills in private and issued a statement calling them a "good balance" between what the ballot drives proposed and what legislators drafted initially.

"They address a number of difficulties for job providers while still ensuring paid medical leave benefits and increased minimum-wage incomes for many Michiganders," he said.

But state Rep. Christine Greig, who will lead House Democrats in the next two-year term, blasted his action.

"With a flick of his lame-duck pen, Gov. Snyder chose to rob the people of Michigan of the strong paycheck and good benefits they deserve," she said in a statement. "It is shameful that this governor, who is just counting down the days to the end of his tenure, would use this opportunity to hurt the people of Michigan one last time."

One law slows down a boost in Michigan's minimum wage, so it will rise to $12.05 by 2030 instead of $12 by 2022 as mandated by the citizen-proposed measure. It repeals an existing provision that ties future increases to inflation, and it reverses a provision that would have brought a lower wage for tipped employees in line with the wage for other workers.

The other new law exempts employers with fewer than 50 employees from having to provide paid sick days - a change that is estimated to leave up to 1 million employees without the benefit. It also limits the amount of annual mandatory leave at larger employers to 40 hours, instead of 72 hours as proposed by the initiative.

The group that led the minimum wage ballot drive has promised to sue. And paid sick time advocates have vowed to launch a 2020 ballot drive to fully reinstate the law that made Michigan the 11th state to require employers to provide paid time off to workers who are sick or who have ill family members.

Republicans will not be able to use a similar "adopt-and-amend" strategy in 2020 because Democrat Gretchen Whitmer, a supporter of paid sick days and a higher minimum wage, will be governor.

It is uncertain if other GOP-backed legislation - to strip or dilute the authority of incoming elected Democrats and make it harder to organize ballot drives - will reach Snyder's desk or if the governor, who is more politically moderate than Walker, would sign any of those measures.