DETROIT (FOX 2) - When the protest turned into a riot at the U.S. Capitol that ended with almost 70 people arrested and four dead, it was eerily reminiscent of a similar scene that played out in Lansing in April.  Protesters, many armed, surrounded Michigan's Capitol and eventually forced their way inside.

While protesters in Washington were not armed on Wednesday, they forced their way inside and even into chambers and representatives' offices. Michigan Governor Gretchen Whitmer, who was the target of the April protests, joined with former Gov. Rick Snyder on Wednesday to condemn the attack.

When people stormed inside the U.S. Capitol, Gov. Gretchen Whitmer said it's similar to what happened in Lansing just 8 months ago

"I think the worst part is, though, how many people were saying they can’t believe this can happen in the United States of America? All I can think was - were they not paying attention to what happened eight months ago?" Whitmer said.

At least six of the protesters who were arrested are from Michigan. The individuals identified by Washington D.C. metro police were released after their arrest on Thursday. At least one of them was in possession of a firearm without a license and a large capacity ammunition feeding device, police said. 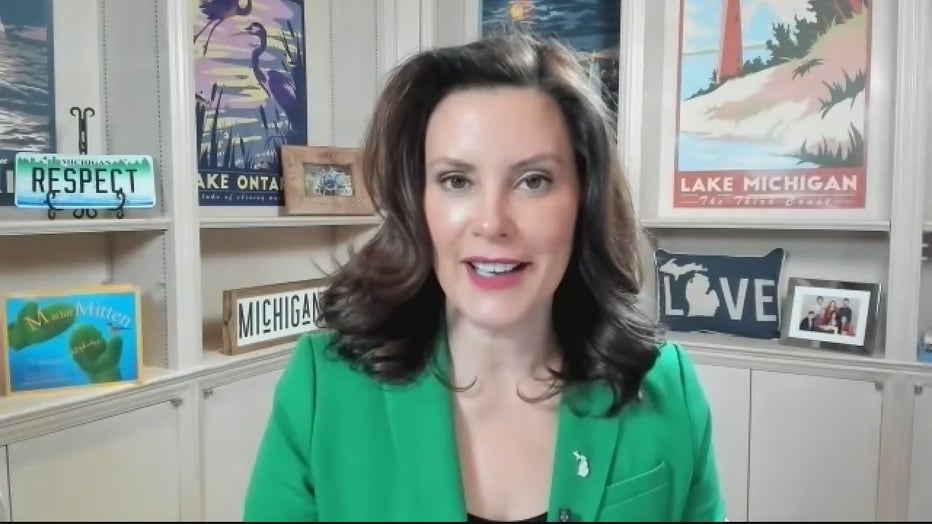 Michigan Gov. Gretchen Whitmer said the violence seen at the U.S. Capitol is not surprising considering what happened in Lansing in April 2020.

Whitmer's been criticized for condemning the attack but also has been questioned for why she wasn't as quick to do the same in Grand Rapids over the summer with the BLM Movement.

"For anyone to try to equate what happened yesterday in the nation's capital with the peaceful protests that, by large, went on across our state and across the country, I think they are intentionally trying to do a disservice to the cause of racial justice and that is one to which we should all be able to aspire and live up to," Whitmer said.

While all eyes were on the Capitol for the riots and subsequent vote certifying President-elect Joe Biden's victory, COVID-19 cases in the U.S. have continued to climb. In Michigan, the vaccines are being distributed, albeit a bit slowly. Whitmer said there's a roadblock in getting the vaccines distributed.

"One of the problems we are having is that one that states all across the country are having is that the feds are holding back to Pfizer vaccine. There are 55 million vaccines in Pfizer‘s freezer farms like the one they have in Portage, Michigan, that are artificially being held back. If we knew they were coming, we could easily ramp up, that doesn’t happen overnight. But we are increasing at such a rate that we will be running out regularly if they don’t do something serious and that’s one way they could help us meet the needs," Whitmer said.

While the vaccine is being distributed and Michigan's cases have leveled off, she said it's still too far out for a decision from the health department on the reopening of restaurants on January 15th when the current epidemic order expires.

"It’s important to get a little bit closer to the 15th and make sure we have as much data as possible before DHHS makes a decision about what their next order will be," Whitmer said she's hopeful they know days and not hours before Jan. 15. "I think it’s important for the industry to know, I know that I’ve got a lot of businesses that are struggling and restaurants are uniquely susceptible to COVID just because you’re indoors and without a mask on."