GROSSE POINTE, Mich. (FOX 2) - Chelsea MacGriff is one of very few females able to pilot the E-2 Hawkeye - often referred to as the quarterback in the air. On Friday Lt. MacGriff showed off those skills - with a flyover of her home town.

"So you are really having to work both arms, both legs to get to do that, so the flying aspect of it was super fun," she said. "Coming in low and as loud as I can be, that was really fun and flying past (Grosse Pointe) South was definitely very special."

"I haven't spent a lot of time in Michigan since I graduated high school here – so coming back and doing this is really rewarding and exciting," she said.

After Chelsea graduated GPS in 2011, she entered the Naval Academy with the single focus of becoming a pilot.

It is a passion her father says began as a small child. The journey has been anything but easy in a field with a small percentage of women - but dad says Chelsea's energy and drive along with her competitive spirit, helped her navigate the way.

"As a father I worry about her doing well in that environment and putting up with the challenges she’s had to put up with," said Scott MacGriff. "We've raised her to be a strong woman.

"Thankfully she has the type of personality and the type of attitude and drive to do well in that environment.

"I can almost get emotional about it because honestly, I am so proud of her – the amount of the hard work she has put into it. She has been on deployment before, combat deployments before, but then to be able to see her fly that close, doing her job, is just thrilling."

"I have been lucky my whole life," she said. "I like to describe my dad as overly supportive. Anything I take on, he is my number one fan, with my mom right there with him."

It's that unconditional support Lt. Chelsea MacGriff credits to getting her where she is today - ready to lead a crew of five highly trained Naval flight officers in battle - or fly over the Detroit area - inspiring young people - with hard work and dedication - dreams do come true.

"It is well worth the effort it takes to get here," she said. "I can’t imagine doing anything else." 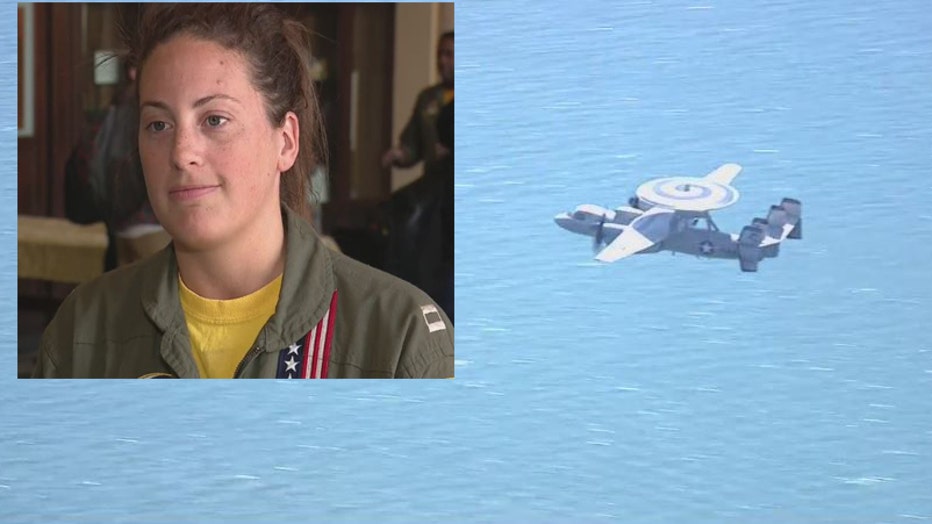 Chelsea MacGriff and the E-2 Hawkeye she flew today.