WASHINGTON - The U.S. House of Representatives voted Thursday to hold Steve Bannon, a longtime ally and aide to former President Donald Trump, in contempt of Congress for defying a subpoena from a committee investigating the violent Jan. 6 Capitol riot.

In a rare show of bipartisanship on the House floor, the committee's Democratic chairman, Mississippi Rep. Bennie Thompson, led the floor debate along with Republican Rep. Liz Cheney of Wyoming, one of two Republicans on the panel. Still, the vote was 229-202 with most GOP lawmakers voting "no," despite the potential consequences for Congress if witnesses are allowed to ignore its demands.

The Jan. 6 House select committee has vowed to move swiftly and forcefully to punish anyone who won’t cooperate with the probe. But it’s likely up to the Justice Department, which has the final say on the matter.

While the House vote may have succeeded, there’s still considerable uncertainty about whether the Justice Department will prosecute Bannon, despite Democratic demands for action.

If Bannon is found guilty of the misdemeanor, he could face a $100,000 fine and up to a year in jail.

The outcome determines not only the effectiveness of the House investigation but also the strength of Congress’ power to call witnesses and demand information — factors that will certainly be weighing on Justice officials as they determine whether to move forward. 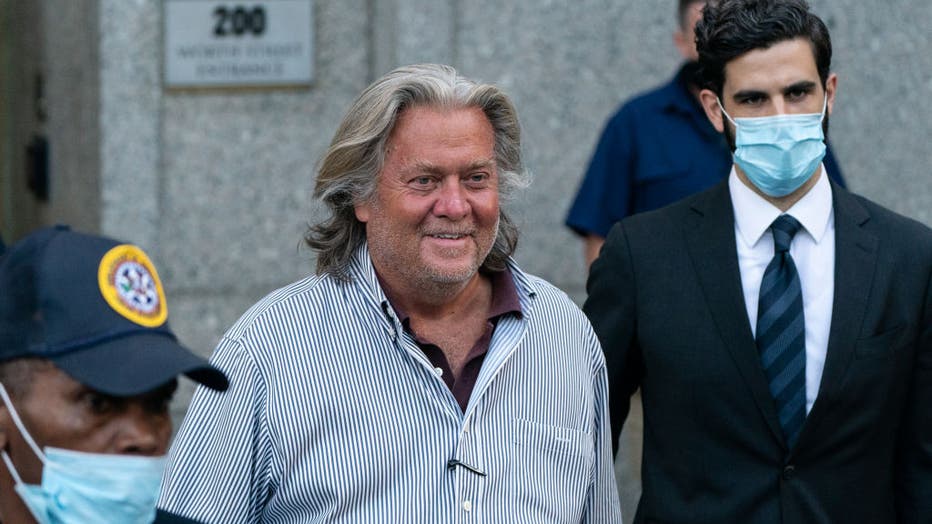 While the department has historically been reluctant to use its prosecution power against witnesses found in contempt of Congress, the circumstances are exceptional as lawmakers investigate the worst attack on the U.S. Capitol in two centuries.

The Jan. 6 panel voted Tuesday evening to recommend the contempt charges against Bannon, citing reports that he spoke with Trump before the insurrection, promoted the protests that day and predicted there would be unrest. Members said Bannon was alone in completely defying his subpoena, while more than a dozen other witnesses were at least speaking to the panel.

Following the House’s vote to hold Bannon in contempt Thursday, the matter is to be referred to the U.S. attorney’s office in Washington where it will then be up to prosecutors in that office to present the case to a grand jury for possible criminal charges.

The office is run by Channing Phillips, an acting U.S. attorney who had previously served in the position in the Obama administration. Another attorney, Matt Graves, has been nominated for the post, but his nomination is pending in the Senate.

The Justice Department has in the past been wary of prosecuting congressional contempt cases, especially when the White House and the House of Representatives are controlled by opposing political parties. During the Obama administration, the department declined to prosecute then-Attorney General Eric Holder and former IRS official Lois Lerner following contempt referrals from the Republican-led House. And George W. Bush’s Justice Department declined to charge Harriet Miers after the former White House counsel defied a subpoena in a Democratic investigation into the mass firings of United States attorneys.

In addition, the Justice Department’s Office of Legal Counsel has said in multiple opinions — including one from the 1980s involving Supreme Court Justice Neil Gorsuch’s mother Anne Gorsuch, who refused to turn over documents in her capacity as administrator of the Environmental Protection Agency — that the Justice Department has discretion on when to prosecute for contempt, even when receiving a referral from the House.

Still, the Bannon case is different, as Democrats hold both Congress and the White House — and because the committee is investigating a violent insurrection of Trump’s supporters who beat law enforcement officers, broke into the Capitol and interrupted the certification of Biden’s victory.

"What we’re talking about is this massive, violent assault on American democracy," said Maryland Rep. Jamie Raskin, a member of the panel.

Many of the rioters who stormed the Capitol marched up the National Mall after attending at least part of then-Trump’s rally, where he repeated his meritless claims of election fraud and implored the crowd to "fight like hell." Dozens of police officers were injured as the Trump supporters overwhelmed them and broke through windows and doors to interrupt the certification of Biden’s victory.

The rioters repeated Trump’s false claims of widespread fraud as they marched through the Capitol, even though the results of the election were confirmed by state officials, upheld by courts and even rejected by Trump’s own attorney general.

More than 600 people face charges in the Jan. 6 attack. In the days after the attack, scores of rioters flaunted their participation in social media posts that bragged about their ability to get inside the Capitol. But then many started realizing it could be used as evidence and began deleting it.

The investigation panel said it believes Bannon "had specific knowledge about the events planned for January 6th before they occurred." Selection committee members pointed to Bannon’s Jan. 5 podcast where he said, "All hell is going to break loose tomorrow."

"In short, Mr. Bannon appears to have played a multi-faceted role in the events of January 6th, and the American people are entitled to hear his first-hand testimony regarding his actions," a report stated. "Mr. Bannon’s testimony and document production are critical to the Select Committee’s investigation."

Even if the Justice Department does decide to prosecute, the case could take years to play out — potentially pushing past the 2022 election when Republicans could win control of the House and end the investigation.

There's still considerable uncertainty about whether the department will prosecute, despite Democratic demands for action. It's a decision that will determine not only the effectiveness of the House investigation but also the strength of Congress’ power to call witnesses and demand information.

While the department has historically been reluctant to use its prosecution power against witnesses found in contempt of Congress, the circumstances are exceptional as lawmakers investigate the worst attack on the U.S. Capitol in two centuries.

Attorney General Merrick Garland gave no hints during a House hearing on Thursday.

"If the House of Representatives votes for a referral of a contempt charge, the Department of Justice will do what it always does in such circumstances. It will apply the facts and the law and make a decision consistent with the principles of prosecution," he said.

Democrats are pressuring Justice to take the case, arguing that nothing less than democracy is on the line.

"The stakes are enormous," Maryland Rep. Jamie Raskin said in an interview with The Associated Press.

If the Justice Department doesn't prosecute, the House has other options, including a civil lawsuit. That could also take years but would force Bannon and any other witnesses to defend themselves in court.

Another option would be for Congress to try to imprison defiant witnesses — an unlikely, if not outlandish, scenario. Called "inherent contempt," the process was used in the country’s early years but hasn’t been employed in almost a century.

The lingering acrimony over the insurrection, and the Bannon subpoena, flared Wednesday at a House Rules Committee hearing held to set the parameters of Thursday’s debate. Under intense questioning from Raskin, Florida Rep. Matt Gaetz, a Republican who defended Trump and opposed the Bannon contempt effort, said he accepted that Biden is the president but would not say that Biden won the election.

Raskin said, "I know that might work on Steve Bannon’s podcast, but that’s not going to work in the Rules Committee of the United States House of Representatives, Mr. Gaetz. I’m sorry."