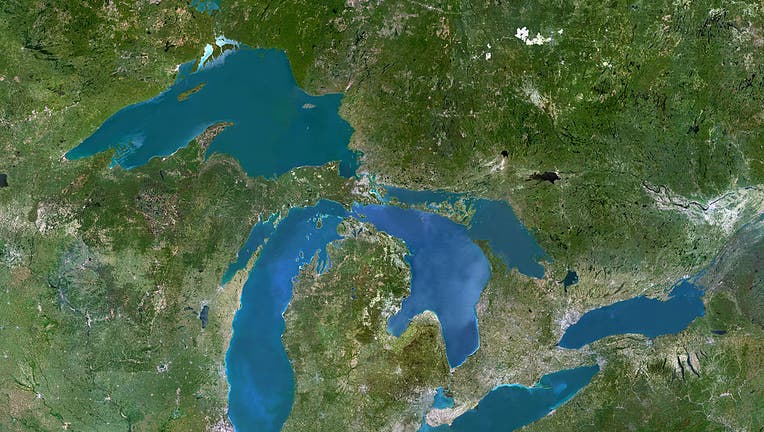 (FOX 2) - The Great Lakes may surround Michigan, but it's the region's indigenous and colonial history that surrounds the ways we know and identify them.

From Ypsilanti to Tecumseh, to Ottawa and Mississauga, the cities and towns and geographic features that dot the Michigan landscape are full of references from the past. Many of the names are derived from indigenous tribes and chiefs.

There's also evidence of Michigan's colonial history in the names we use today. Detroit, for instance, comes from the French term for "strait." But before the city had its name, it was the river that was first identified by its common term today.

"Le détroit du Lac Érié" or the strait of Lake Erie refers to the Detroit River that connects the Great Lake to Lake St. Clair and the water bodies further north and to the west.

The French also had a name for Lake Erie. Early writers referred to the water body as a cat, or Lac Du Chat. But the inspiration behind that name is also baked into the indigenous cultures that previously populated the area.

MORE: Great Lakes shipwreck hunters had a banner year in 2021 searching for remains of old vessels

Here's how the Great Lakes got their names:

Largest in surface area, volume, and rich in natural resources, it's also famous for many shipwrecks including the sinking of the Edmund Fitzgerald, which was popularized in the Gordon Lightfoot song that honors the wreck.

The song's lyrics also reference a poem's phrasing of Gitche Gumee, which translates from an Ojibwe dialect referring to "big sea" or "huge water" or "great lake." The Decolonial Atlas, a volunteer-run project that builds maps in relation to an area's indigenous heritage, says Gichigami directly translates to "sea" or "big liquid."

The origins behind Lake Michigan's name are a bit less glamorous. The direct translation comes from an Ojibwe term of Mishigami, or "large lake" or "great water."

But the Michigan Department of Great Lakes, Environment and Energy says before its common tongue stuck, it was first called Grand Lac by the French navigator Samuel de Champlain.

It was later named Lake of the Stinking Water. The "stinking" name is possibly derived from the abundant algae that grows on parts of the lake.

It was also called Lake of the Puants after the nations that lived along its shores. Puans were reported to be the first indigenous tribe to meet with the first Europeans to arrive in Wisconsin.

Before the name settled on Michigan however, it was called Lac des Illinois due to the access it provided to band by the same name. Increased interactions with the natives would result in colonizers settling on its final name of Michigan.

French explorers also had a hand in naming Lake Huron.

Its original name was karegnondi, given by a native tribe called the Wyandot, which roughly translates to "lake" or "freshwater sea."

The Wyandot people, a collection of tribes that lived in part of Canada north of Lake Ontario and east of Georgian Bay, came into contact with many European travelers in the 1500s and 1600s.

It was in their interactions with the French as well as their conflicts with other indigenous tribes like the Iroquois that pushed them into more engagement with Europeans. Following their defeat, many of the tribe settled across Michigan and Ohio, according to the Great Lakes Guide.

Another term of Wyandot is Huron, which was used by French explorers.

To understand Lake Erie's roots, it's important to understand the tribe that inhabited its shores.

The Erie tribe, which lived south of Lake Erie in what we know as New York, Pennsylvania, and Ohio, was often referred to by settlers as the Cat Nation. As researched by Case Western Reserve University in an article on natives that lived in Ohio, European figures referred to them as Cat People or the Nation of the Cat.

Why? Because of "a prodigious number of wildcats, two or three times as large as our tame cats" according to Case Western. This may in fact refer to native raccoons, instead of actual felines.

The word "Erie" is actually a shortened word from an Iroquoian dialect that used the word erielhonan, or "long tail." Some researchers theorize the name "long tail" is a reference to the raccoon tails that were worn as clothing.

Ontario comes from the Iroquoian word Oniatarí:io, which translates to Lake of Shining Waters.

However, when Champlain came upon the lake, he called it Lake St. Louis in the early 17th century. Researchers believe this was likely after Louis XIV. While listed as that name on at least one other map produced in 1656, it eventually was given the name Lacus Ontarius, or "beautiful lake," by a Jesuit historian named Francis Creuxius.