MONDAY NEWS HIT - Several weeks ago, Gov. Gretchen Whitmer set a goal to get every school district open to some form of in-person learning by March 1. The deadline arrived today, so how'd we do?

A new survey of Michigan districts found that around 97% met the criteria.

Did schools meet the March 1 goal of reopening in-person learning?

A new study shows that around 97 percent of school districts in Michigan planned to offer some form of in-person learning by March 1, an unofficial deadline set by the governor to reopen learning to all.

Although, some notable exceptions were also reported - namely Detroit Public Schools which hasn't released formal plans of reopening, but intended to start in early or mid-March.

While returning to some sense of normalcy can help with morale in a state exhausted by pandemic-induced rules and public health restrictions, there are ripple effects to getting kids back in the classroom.

Officials have also identified increases in mental health issues in young kids isolated from friends and stuck at home. Several school districts in Michigan have reported student suicides that often became flashpoints in the debate over whether learning centers should be reopened.

But the effects go beyond that - with kids at school, parents won't be pigeonholed into choosing whether to stay home or go to work. Those sorts of decisions have made the responsibilities of parenting harder.

Months ago, opening schools up was a debate over "if," especially in Detroit where the teachers union organized against the district and protested actions by the DPSCD to allow kids to return to in-person learning. 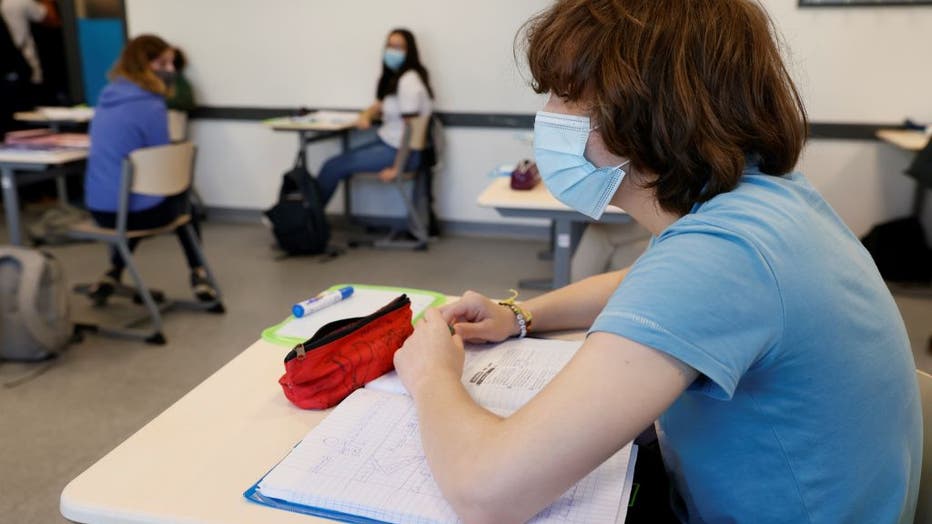 FILE - Middle school pupils attend a lesson in their classroom, on June 22, 2020 in Boulogne-Billancourt, outside Paris. (THOMAS SAMSON/AFP via Getty Images)

While the EON/BAMN caucus - an advocacy group for Detroit schools - remains against any form of reopening, Detroit Public Schools have gradually reopened anyways. Learning Centers were reopened to kids that need the resources the most last week.

However, with test positivity rates for COVID-19 well below 5% in the city, it appears likely the district will be reopening its doors within the next two weeks.

An elderly woman who was bedridden was killed in a Sterling Heights house fire Saturday night after both civilian and first responder rescue attempts failed.

A neighbor whose door was knocked on by the victim's daughter said she ran to their house around 9:45 p.m. asking for help. "She was explaining to us that her mother is trapped inside her home...which had apparently caught fire," said Fred Jabboori.

From the doorway, Jabboori could see the room where the mother slept was engulfed in flames. He was unable to enter the home because of the intensity of the fire. A firefighter who tried to rescue the woman was hurt after part of the ceiling fell on him, leaving minor burns.

Neighbors described the family as a quiet, kind, and religious people.

The victim's daughter and Sterling Heights firefighter were sent to the hospital after trying to save an older woman.

Family and friends numbering in the hundreds gathered for a candlelight vigil Sunday to honor an 18-year-old who died after the car she was in was shot up by a gunman.

"To believe that this child won't be able to go to college and live the rest of her life is one of the saddest things I will have to wrap my brain around for the rest of my life," said Henry Ford Academy basketball coach Jeff Hachigan said of Carlesa Taylor.

Taylor was riding in a car with friends when authorities say a Dodge Durango pulled alongside and started shooting. Only one of the three teens inside would survive.

Taylor was considered the energy behind her basketball teams at Henry Ford Academy and Ecorse High School, which is why so many showed up. The suspects in her death have yet to be identified.

Teammates, family, and friends gathered at HYPE Athletics in Dearborn Heights to honor Carlesa Taylor, one of the victims of a triple shooting on Detroit's westside

A new bill introduced in the Michigan legislature would allow bars to extend closing hours to 4 a.m. as a means for recouping some of the lost revenue caused by pandemic restrictions.

"Once that is lifted it gives the local establishments, restaurants, bars, the ability to make up some lost time," said Rep. Ryan Berman.

While industry advocates supported the measure, it wasn't considered a high priority at the moment. However, upon the return to normal hours for bars and restaurants, it will be one of many ways groups can hope for a way to make back lost money.

The Centers for Disease Control and Prevention's Advisory Committee on Immunization Practices (ACIP) has voted to recommend Johnson & Johnson's COVID-19 vaccine for emergency use for individuals ages 18 and older in the United States.

The 12-0 vote, with one recusal for a potential conflict of interest, comes following an official emergency use authorization by the Food and Drug Administration on Saturday. The ACIP, a group of independent health experts that advises the CDC on the types of populations and circumstances for which vaccines should be used, made the recommendation after an emergency session was called to review the vaccine's data.

CDC Director Dr. Rochelle Walensky signed off on the recommendation on Sunday, calling the decision "another milestone toward an end to the pandemic."

"The Janssen vaccine has been shown to be safe and effective in preventing severe COVID-19 illness, hospitalization and death," Walensky said in a statement. "This vaccine is also another important tool in our toolbox to equitably vaccinate as many people as possible, as quickly as possible."

After that unseasonably warm Sunday, temperatures are going to fall back down to 35 today. You won't have to wait long for warmer conditions to return, however.

A much colder Monday!

Massive iceberg, 20x the size of Manhattan, breaks off in Antarctic

A massive iceberg, 20 times the size of Manhattan, recently broke off in the Antarctic according to the British Antarctic Survey.

Researchers said the iceberg measured 1270 km² and broke away from the Brunt Ice Shelf in a news release.

Scientists had been anticipating the crack over the past decade and don’t believe the split will damage the local research station. The station remains closed during the winter.

The first indication of the definite breakaway, or calving, came last November when scientists discovered other cracks, or chasms, in the ice shelf.

"Our teams at BAS have been prepared for the calving of an iceberg from Brunt Ice Shelf for years," Director of British Antarctic Survey Dame Jane Francis said. "We monitor the ice shelf daily using an automated network of high-precision GPS instruments that surround the station, these measure how the ice shelf is deforming and moving."