One year after Tate Myre, Madisyn Baldwin, Hana St. Juliana, and Justin Shilling were killed at Oxford High School, the parents of Justin and Tate are sharing memories of their children whose lives were cut short too soon.

One year after the tragic mass shooting, a community continues to heal and cope with the losses.

"We have all made it a full year. It hasn't been easy by any measure," said Justin's mother, Jill Soave.

Justin was shot after being trapped in the bathroom with the shooter for several minutes. The 17-year-old's organs were donated, one last act of kindness before he was laid to rest.

"We can all be more like Justin. We can give freely. It doesn't cost a dime. We can be there for each other and lift each other up, and that's how he really lived, and I'd love for him to be remembered by that," Jill said. "He lifted everybody up. He was the first to make you laugh."

She said she will spend the tough day surrounded by those closest to her.

"We are going to go to the cemetery, and we are going to be with family and friends. Comfort food, pass a dish and just be together," she said.

As she remembers Justin, Jill sits beside Buck and Sheri Myre, whose son Tate Myre was killed.

Jessica Dupnack sat down with the parents of Tate Myre and the mother of Justin Shilling to talk about their tragic losses one year after the shooting attack at Oxford High School.

Tate was the youngest of three brothers. His parents said they miss his contagious laugh, and they cry every day. 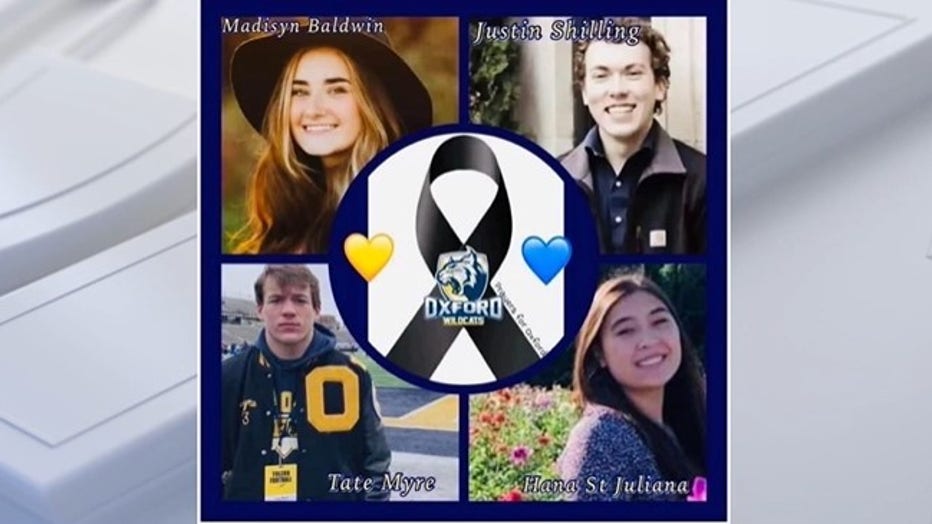 The parents lean on legacy to keep their children’s memories alive.

"We want all of the four angels remembered for the love they gave and the example they showed," Jill said.

As they mourn and heal, the parents say part of that process is anger and frustration at the failures that led to the tragedy.

Just this week, Jill and the Myres learned that an in-depth policy book to prepare for events like a mass shooting was never adhered to by officials at Oxford High School, according to two former school board members.

"There wasn't a team together to be able to make a decision on the kid when he went into the counseling office that day," Buck said.

Buck is referring to the shooter, who met with school employees and his parents prior to opening fire.

The parents find themselves going back to the morning of the shooting when the shooter, seemingly begging for help, was caught by a teacher with a violent drawing. However, he was sent back to class by school personnel with the murder weapon in his backpack.

"Common sense would have said that day, 'I'm going to look in the backpack.' Could somebody have done that? How much more common sense level can you can get? No, they handed it back to him. They gave the devil the keys to the kingdom."

Jill has a 15-year-old who is still at Oxford High School. She said they just don’t go much for a lot of reasons, but faith in their safety at the school is a big reason why.

The Myres feel the same.

"We are done. Tate was our youngest, but if we had a younger one I'm not quite sure we are staying there, from what we've learned," Buck said.

Moving forward, these families want accountability for those who failed these kids, and they are using their platform to promote children’s mental health before it escalates to tragedy.

"Mental health has to be taken more seriously," Sheri said.

"I think there are a lot of kids that are suffering, and we have kind of dropped the ball as a society with our kids. They're craving our attention.," she said.

Sheriff Mike Bouchard talk about law enforcement's response that tragic day one year ago where four students lost their lives in the attack at Oxford High School.