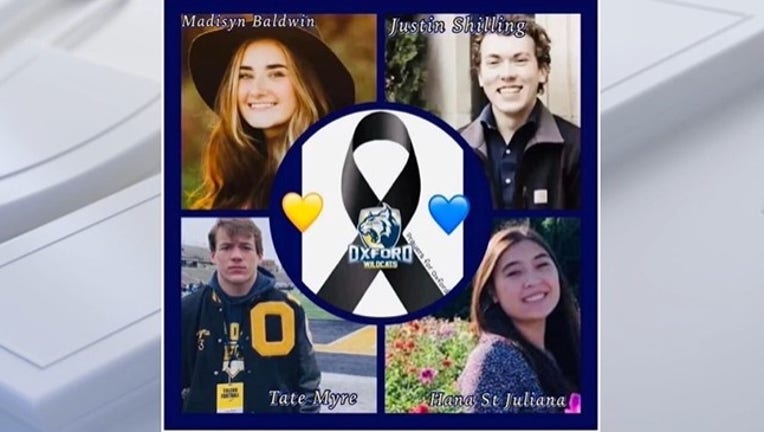 OXFORD, Mich. (FOX 2) - It's been 12 months - 365 days - since four teenagers at Oxford High School went to school one morning and never came home. Tate Myre, Hana St. Juliana, Madisyn Baldwin, and Justin Shilling were the four students who were shot and killed inside the halls of their high school by a fellow student.

Classes for the entire district

The 16-year-old was a standout on the Oxford football team and had just come back from an on-campus visit at the University of Toledo - where he wore his Oxford letter jacket, emblazoned with the Oxford ‘O’.

He was one of the first who had been shot and was in the hallway after the shooting.

Law enforcement got inside and pulled him from the building shortly after they arrived but he died in the cruiser on the way to the hospital.

Attorneys for his family have claimed a school security guard walked by Tate Myre as he laid in the hallway after being shot. They claimed that the guard believed it was part of an ALICE drill and that he was in makeup.

Madisyn Baldwin, 17, was the second victim identified by the Oakland County Sheriff's Office on that terrible day. The Oxford High School senior would have graduated in the spring of 2022 and a chair was left empty for her and Justin Shilling during graduation ceremonies at Pine Knob.

In the months after Madisyn Baldwin's murder inside the school, her family filed a federal lawsuit against Oxford High School, saying that the people who could have taken steps to prevent the tragedy - but didn't - need to be held responsible.

"I will never forgive him or forget him - but do I feel sorry for him? 100% - he cried out for help," Beausoleil said. "To me, it's about making sure things change in the district and the mental health changes in the community in general." her mother Nicole Beausoleil said.

At 14-years-old, Hana St. Juliana was the youngest of the four victims. She was the third victim identified on November 30 and her family has pushed for a permanent memorial at the school to make sure the four victims will never be forgotten.

In the days after their murders, a makeshift memorial went up on the front sign. Mourners laid flowers, stuffed animals, and signs to honor the four teenagers. But in January, as school was set to resume, that makeshift memorial was removed as the district attempted to help students' healing process.

The school has said they plan to place four hearts in the school's courtyard with their initials but her family wants more: they want the pictures of the four victims front and center so nobody forgets them.

Justin Shilling was the other senior who died in the shooting. He was rushed to the hospital on that Tuesday and died early the next day.

His mother told FOX 2 in July that he was a scholar student, played every sport – and just visited Oakland University where he wanted to study business starting in the fall of 2022. He never got the chance.

"You don't get over something like this,  I have to let go of a five-year plan, a 10-year plan, things of that nature," Jill says."I have to make sure everyone is okay in the moment. Are we happy, are we healthy, are we fed is their love, and we are good."

Jessica Dupnack sat down with the parents of Tate Myre and the mother of Justin Shilling to talk about their tragic losses one year after the shooting attack at Oxford High School.