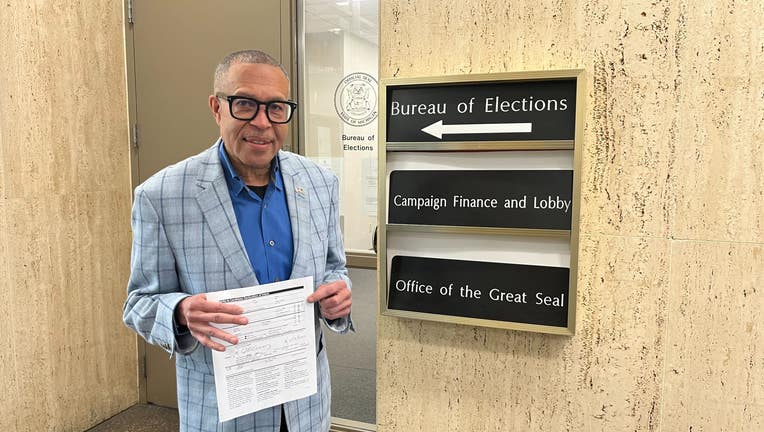 James Craig files a declaration to run as a write-in candidate for Michigan governor. Courtesy of James Craig.

(FOX 2) - James Craig made a visit to Michigan Bureau of Elections Tuesday to file as a write-in candidate for governor.

Craig's trip to Lansing sets him on a very different path toward the executive seat in Michigan, following his disqualification from the Republican Primary ballot in May.

It's the latest development in what's been a chaotic campaign season in Michigan, which has three statewide offices up for grabs during a consequential Midterm race. Craig, who was campaigning for the GOP primary nomination, was among five candidates that failed to submit enough valid signatures by the campaign deadline.

Craig had teased his intention to file a write-in candidacy on Let It Rip last week, where he spoke alongside another gubernatorial hopeful in Perry Johnson.

Both were considered heavy weights for the nomination in a crowded field.

The former chief of police in Detroit has campaigned on the belief he carry more sway in Southeast Michigan, a region that Democrats have often dominated in previous election cycles.

"I am not giving up, they have robbed me, and robbed Perry and guess what - write-in," he said June 9. "There are so many people that have reached out through my campaign who have said, 'Chief you are a fighter, don't give up, continue to fight.' Guess what? I'm going to."

Both Craig and Johnson believe their disqualifications from the ballot were wrong.

Craig promised to get to the bottom of it as a former cop, adding that he and Johnson "were hoodwinked."