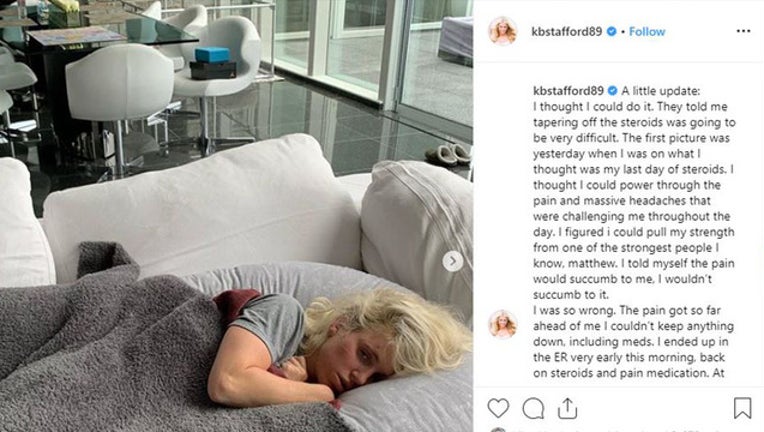 In a post on Instagram, she said the "pain and massive headaches" prompted her to go to the ER following the end of her steroid medication.

"They told me tapering off the steroids was going to be very difficult," she wrote. "I thought I could power through the pain and massive headaches that were challenging me throughout the day [on Tuesday]. I figured I could pull my strength from one of the strongest people I know, matthew [sic]."

But she says the pain was too strong and she couldn't keep any food down, or any of her other medication. So they made the decision to go to the emergency room Wednesday morning.

She said the hospital will be keeping her overnight to monitor the situation.

"At first, I felt like I had failed, like I couldn't handle it.. but what I really failed at was listening to my own body," she wrote.

She added that it was a lesson she'll have to "keep reminding myself of."

She hopes to be released from the hospital on Thursday.

Kelly, who's married to Detroit Lions quarterback Matthew Stafford, went home over the weekend after undergoing a 12-hour brain surgery.

Earlier this month, she shared that an MRI showed the tumor after she had vertigo spells within the last year.

Her surgery was supposed to last 6 hours, but when doctors began they discovered an abnormal vein. Fortunately, the doctor who operated on her was familiar with it, and has even written about it.

She called that "God's work."