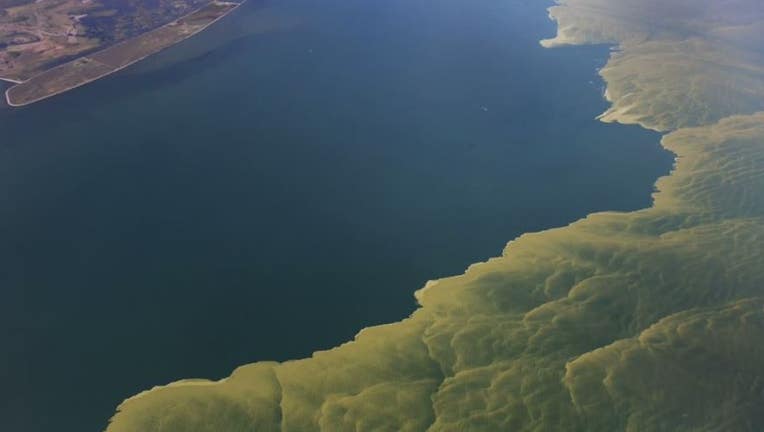 TOLEDO, Ohio - The toxic blob of algae that turns western Lake Erie a ghastly shade of green each summer and threatens drinking water and fish should be on the smaller side again this year following another dry spring, scientists predicted Wednesday.

Researchers expect this will be the first time in more than a decade that the shallowest of the Great Lakes will see back-to-back years of relatively mild algae blooms. But they caution that it’s not a sign the lake is turning the corner just yet.

That’s because they say the rosy outlook this year is mainly due to the lack of heavy rains that typically wash phosphorus-laden livestock manure and chemical fertilizers off farm fields and into the lake where it feeds the algae.

Ohio’s leaders have been under pressure to combat the blooms since algae toxins in 2014 left more than 400,000 people around Toledo unable to drink their tap water. Up until now, little progress has been made.

Republican Gov. Mike DeWine is betting on cleaning the lake through an ambitious 10-year plan offering farmers financial incentives to adopt new agriculture practices and creating a network of wetlands to capture and filter runoff from fields.

But those efforts are just getting started. The approach is being watched closely by states struggling with an increasing number of algae outbreaks. Some environmental groups are skeptical, but others that have been at odds with the farming industry are hopeful.

The forecast for this summer released by NOAA predicts the bloom will come in at 3 on its severity index — a mild reading on par with last year. Anything above 5 indicates a severe bloom.

The algae outbreaks have become more frequent and severe since 2008. But if this summer’s forecast holds true, three of the last four years will be below a 5 on the ratings scale.

"It doesn’t make sense to give all the credit to the weather on years when there is a smaller bloom and put all the blame on the farmers if there is a big bloom," he said.

The blooms contain blue-green algae or cyanobacteria, which can produce a liver toxin called microcystin that is harmful to people and can be fatal to animals, including dogs. Even in years when there are smaller blooms, they can still produce dangerous toxins.

NOAA and other U.S. and Canadian agencies have set a goal of reducing the Lake Erie bloom to a 3 on the index.

Ohio, Michigan and the Canadian province of Ontario also have pledged to reduce runoff of phosphorus by 40% by 2025 from the 2015 amount.

Measurements this year in the Maumee River, which carries much of the farm runoff from Ohio and Indiana into the lake, show that there are still high concentrations of phosphorus, said Laura Johnson, director of the National Center for Water Quality Research at Heidelberg University in Ohio.

The big difference, she said, is it has been very dry, which has greatly reduced the amount of water flowing in the river.

Until significant and consistent reductions in phosphorus amounts are made in the agricultural heavy Maumee River watershed, the blooms will continue to be a problem, said Don Scavia, a professor emeritus at the University of Michigan and a member of the forecast team.

"We cannot just cross our fingers and hope that drier weather will keep us safe," he said.