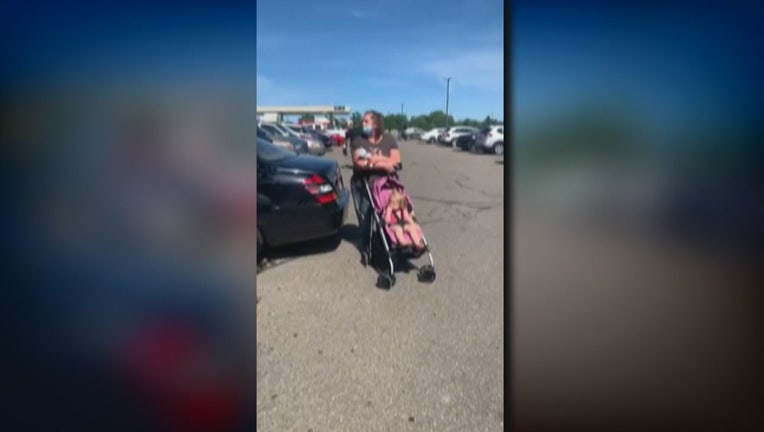 LIVONIA, Mich. (FOX 2) - A 46-year-old woman from Livonia has been charged after a confrontation with another woman in a Kroger parking lot.

Wayne County Prosecutor Kym Worthy says Paula Gearin intentionally blocked the other woman's car so that she was unable to leave, and has been charged with disturbing the peace.

The confrontation happened the afternoon of June 13 at the store on Eight Mile Road in Livonia. Gearin was in the store with a child and got into a fight with another female shopper who also had children with her.

The other woman left and went to her car to load her groceries. As she was attempting to drive off, it's alleged that Gearin stood behind her car and wouldn't get out of the way to let her leave. The other woman then began recording on her phone.

Shaneeka Montgomery-Strickland brought the confrontation to the attention of FOX 2 and shared her video because she says as an African American woman it's important to hit the record button when things like this happen.

"This needs to be known. You can't just stay hush hush about everything and keep on letting people get away with nonsense," Montgomery-Strickland told FOX 2 after the confrontation happened. "I've gotten a lot of responses. People are very angry and upset about it because they say it makes no sense. What is wrong with people? Why are they still out here doing this after all that's going on, all the changes we're trying to make? After Black Lives Matter? It makes no sense."

Livonia police officers came to the Kroger that afternoon and spoke with both women. Montgomery-Strickland filed a police report. Gearin has since been charged with disturbing the peace.

Montgomery-Strickland told FOX 2 that the argument started over the way her son reached to grab a bottle of Gatorade.