YPSILANTI, Mich. - It took Phil and Reed Donovan a few days or maybe even a week before realizing what was missing.

Their prized Oreodont skull originally dug up in South Dakota, had been placed on display at World of Rocks for only for a couple weeks before mustache-wearing man put in his pocket and walked out.

"We put it on social media and made it public. Decided 'let's share it' and within two days it had 230 shares not just in the Ypsilanti-Ann Arbor-Detroit region, but throughout the nation," Phil said. "After that happened, we got in touch with the news, the police took a report."

Then, close to noon on Monday, somebody ran up to their door wearing glasses, hat, and gloves, and opened the door and setting a box inside the business. They exited as quickly as they entered.

"When my employee went to check the box, there was an apology note, as well as the skull. It still had the price tag on it, too," said Phil. 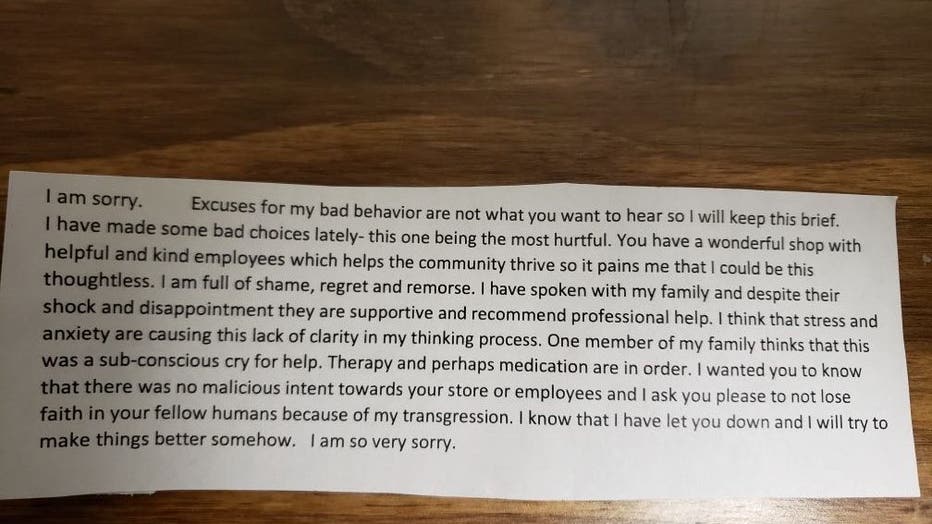 The Donovans said they were shocked at their unannounced delivery, believing their one of their most important items was gone forever. While the loss would have been a serious financial hit for local rock shop, they just wanted to get the word out to other local businesses to watch out for the guy.

Instead, their week kicked off with a twist instead.

While the Donovans are in the business of making money, their ulterior motive for selling rocks is education and making science interesting. For them, each rock formation, age, and type helps tell part of the world's story.

"By having interesting stories, the way they have shaped the nation and the world puts it in perspective," Phil said. "They tell the story of the whole world."

For instance, did you know camels used to roam the continental U.S.? About the size of a greyhound, they were the first animals to chew their own cud, much like goats and cows do today. Paleontologists have a longer name for these little grazers, but they're more commonly-known as oreodonts.

They walked the Earth long before any human did, and even much longer before any thief decided to steal prized fossils too.