DETROIT - Dave Portnoy has been on a mission to save small businesses on the verge of collapse during the COVID-19 pandemic. So far, his charity has helped nearly 200 businesses nationwide, including several in Michigan.

Portnoy was in town for the unveiling of his new Sportsbook in Greektown recently, which pushed the fundraising even higher with a $3.2 million haul over the weekend.

"I went on a rant - which I'm prone to do, I like to talk - 'saying either the government had to give small business, restaurants, bars money and lots of it or you have to open up and let them do their business. But you can't have both because only one thing can happen," he said, speaking to FOX 2's Amy Andrews. "(Otherwise) all these places, mom and pops are going to go out of business. So I went on that rant on Instagram, it went viral. And then I was challenged 'Hey big mouth basically put your money where your mouth is.'"

After seeing the destruction that COVID-19 restrictions had wrought on mom and pop stores in New York, he called on his legion of die-hard fans, along with some successful friends, to chip in and help.

How the Barstool Sports fund has saved several businesses in Michigan

Dave Portnoy has been on a mission to save small businesses on the verge of collapse during the COVID-19 pandemic. So far, his charity has helped nearly 200 businesses nationwide, including several in Michigan.&nbsp;

Now, $33 million dollars later, the success of that charity has become a paradigm for philanthropy at a time when it's needed most.

The effort, dubbed the Barstool Fund, has changed the fortunes of almost 200 businesses.

"I didn't know it would get this big this fast, but I knew we'd be able to make a difference," said Portnoy, who founded the digital media platform. "This isn't the first time we've done a charity and our people really step up."

"I think once people see the faces, of the bars and restaurants and small business owners, if you're not moved by it and you don't want to donate it, there's something wrong with you. Like dead inside," he added.

Portnoy, a University of Michigan graduate was in Metro Detroit this week. While in town, he met some of the families who are now breathing easier because of his help.

"I've had employees that worked for us for 30 years, 20 years, in the teens and their family to us and they're so important and they have families," said Cheryl Kennedy, who runs an Irish Pub in Waterford. "And to see that happen is killing me and we just had nothing left to give them."

Kennedy's, the brainchild of Cheryl and former Detroit police officer Bill Kennedy, has been around for 49 years and like so many other stores that dot the business landscape, have been devastated by the pandemic.

It weathered the first shutdown in the spring. But after a second shutdown later in 2020 due to COVD-19, their daughter Erin didn't know where to turn.

Fortunately, her son is a big Barstool fan and heard about the charity. He sent a video thinking it was a longshot. Turns out, it was exactly what Barstool had in mind. 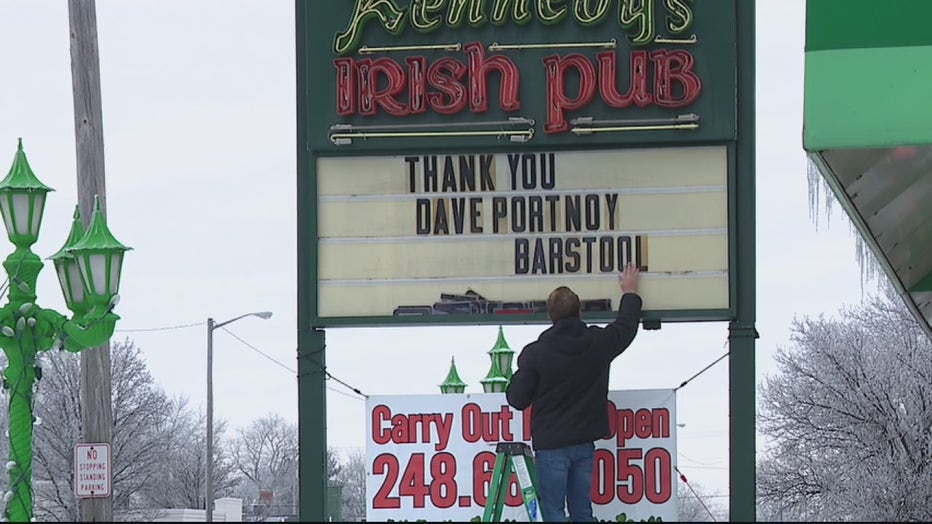 "I'm driving down the road and my phone rang and I answered it and it was Dave. I was shocked. I was almost in tears, it was very uplifting, it was just incredible that he would pick a little Irish pub in Michigan," said Cheryl.

"It's actually stunning that someone didn't do something to help earlier," Portnoy said. "A common theme from these small business owners is they just felt forgotten. Nobody was talking to them, no one was trying to come up with a plan, nobody seemed to care."

To date, the Barstool fund has helped save 191 small businesses on the brink of closures due to COVID-19. That includes several in Michigan.

And Portnoy doesn't plan on stopping any time soon. Of that $3.2 million he raised at Greektown, about $500,000 came from him.

"It's not nearly enough, there are so many businesses that need help, and if you want to donate you go to Barstoolfund.com, and if your a business who needs help, you can apply there as well."