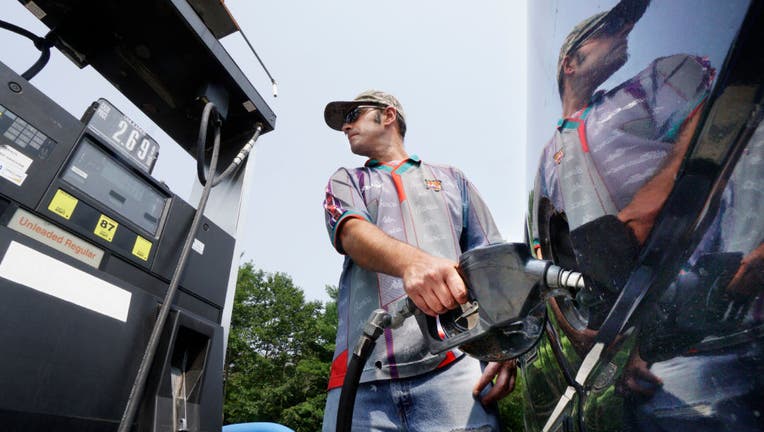 FILE - Reflected in the side of a pickup truck, Matthew Legere, an attendant at Rinaldi Energy in Saco, pumps gas for a customer at the full service station on Tuesday, September 5, 2017. (Staff Photo by Gregory Rec/Portland Portland Press Herald via

It appears Memorial Day will sweep in a familiar series of indicators for Michigan this year as the unofficial start of summer will be accompanied by a rebound in travel.

And you know what that means: a rise at the gas pump.

But it's not just an expected rise in vacations ahead of the holiday weekend but the cyberattack on a pipeline in the eastern U.S. that has impacted fuel delivery for the entire side of the country.

The average cost for a gallon of gas in Michigan is about $2.93, which is slightly higher than the U.S. average.

That's a dollar higher than last year for obvious reasons - travel had plummetted in 2020 due to the pandemic. But it's also slightly more expensive than the rates were in 2019.

Here's everything to consider as you map out your Memorial Day plans.

Who knew a ransomware attack could affect you at the gas pump? Well, apparently the hacker group DarkSide did to some extent when they encrypted the computers of the company Colonial Pipeline.

The 5,500-mile-long pipeline owned by the company carries millions of gallons of oil from Texas to New Jersey and supplies much of the states in the eastern U.S. with fuel. But since Friday, the company has shut down operations as a precaution against further risk by the hack.

While the company has said it may take until next week to get things back online, motorists shouldn't panic about potential supply shortages, according to a blog on GasBuddy.com. "Panic buying or hoarding of gasoline will prolong outages and price spikes, making them much worse."

The pipeline is known to deliver almost half of all gasoline to states in the Southeast. That means some tank farms might start seeing supply running low soon.

This won't directly impact Michigan gas prices since it will be states like Georgia, Tennessee, South Carolina, North Carolina, Virginia, Mississippi, and Alabama that will bear the brunt of the costs. But anyone traveling down there might see a bump in costs.

Rebound in travel on Memorial Day

The day when traveling would return to pre-pandemic levels still hasn't arrived - but there is clearly a growing interest in escaping home life for vacation life. AAA Travel, which tracks traveling trends in the state and around the country, estimates 37 million people were expected to go somewhere for the holiday.

That's an increase of 60% from last year.

It's still not the 43 million people that found themselves traveling in 2019, but it does represent a shift in more vacationing. And since most of those people will be doing so by road trip, drivers can expect an uptick in gas prices.

There is also expected to be an increase in air travel several times as large as what was witnessed last year when only 363,000 people flew, but those numbers are still dwarfed by the expected number of drivers.

The Centers for Disease Control and Prevention have relaxed rules for outdoors, saying anyone who is fully vaccinated shouldn't have to wear a mask around other vaccinated people.

Michigan is also beginning to ease restrictions on its residents, setting benchmarks for reopening the state based on the vaccine rate.

Yesterday, Michigan met its first threshold with 55% coverage of the entire adult population. This means, in two weeks offices can fully reopen.