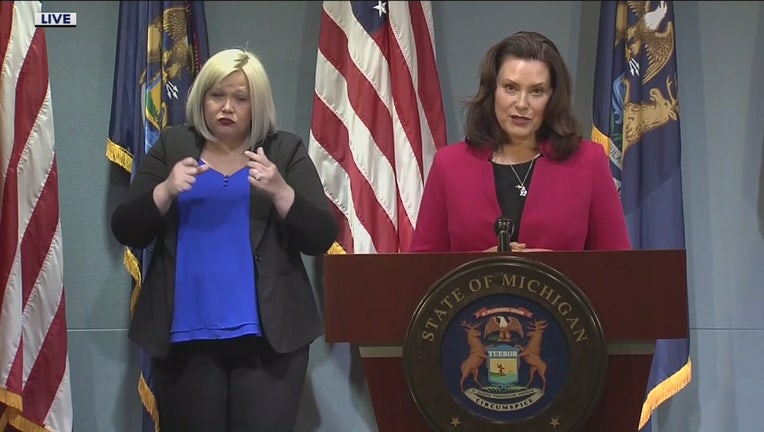 Gov. Whitmer announced the change in gatherings Thursday morning in a press release as she spoke from Lansing.

“The data shows that Michigan is ready to phase in these sectors of our economy, but we must stay vigilant and ensure we’re doing everything we can to protect ourselves and our families from the spread of COVID-19,” said Governor Whitmer. “On behalf of our brave first responders on the front lines of this crisis, we must continue to all do our part by staying safer at home. We owe it to them to do what we can to stop the spread of this virus.”

RELATED: Gov. Whitmer says retail, auto showrooms can open next week in Michigan to appointments only

Gatherings had been banned since late March when the spread of coronavirus was heightened.

Whitmer said the gatherings are allowed as long as people practice social distancing and wear a mask.

Additionally, Gov. Whitmer is allowing the reopening of retail businesses and auto dealerships by appointment only on Tuesday, May 26. She also is lifting the requirement that health care providers delay some nonessential medical, dental, and veterinary procedures statewide beginning on Friday, May 29.

She said she expects to extend the Stay Home order but did not say when that would be announced. It's currently set to expire on May 28. She said she would announce details on that in the coming days.

The lifting of banning of gatherings comes just a few days after Whitmer allowed businesses in the upper peninsula and parts of the lower peninsula could reopen and operate in a limited capacity. The reopening will take place Friday. The decision is one that Republicans have pressed for weeks, despite Whitmer's emphasis on maintaining blanket bans on business across the state.

The order will impact bars, restaurants, and retail outlets.

Census data shows the impacts of the pandemic on U.S. small businesses.

The move will affect regions 6 and 8 as defined by the Michigan Economic Recovery Council (MERC), which includes the entire upper peninsula and the greater Traverse City region. Those businesses allowed to reopen must adopt safety measures and their workers must be trained in "workplace infection-control practices." While reopened, bars and restaurants must limit their capacity to 50% of their normal seating.

Those regions have now entered phase 4 of the MI Safe Start plan, labeled "improving." That means small gatherings can now resume. It also means that cases and deaths linked to COVID-19 have declined sharply as testing for the virus has grown. Recently, the state completed 15,000 daily tests.

Whitmer has been adamant that Michigan is flattening the curve but is "not out of the woods yet". She has referred to the re-engagement of Michigan's economy as a 'dial' and not a switch that can just be flipped.

The rest of Michigan is still in Phase 3 of Whitmer's six-phase plan called the MI Safe Start Plan.

Phase 3 is the "flattening" phase, which means daily new cases and deaths are relatively constant but transmission rates have fallen to manageable levels. According to Gov. Whitmer's plan, Michigan will move into Phase 4, the "improving" phase, when the number of new cases and deaths has decreased for a period of time, and when new outbreaks can be quickly identified and contained.

Moving into Phase 4 would mean more lower-risk businesses can open, like retail and office spaces. Dining-in at restaurants won't be allowed until Phase 5 under her plan.

RELATED: When can we move into Phase 4?

New coronavirus clusters have surfaced around the world as nations struggle to balance restarting their economies and preventing infections.