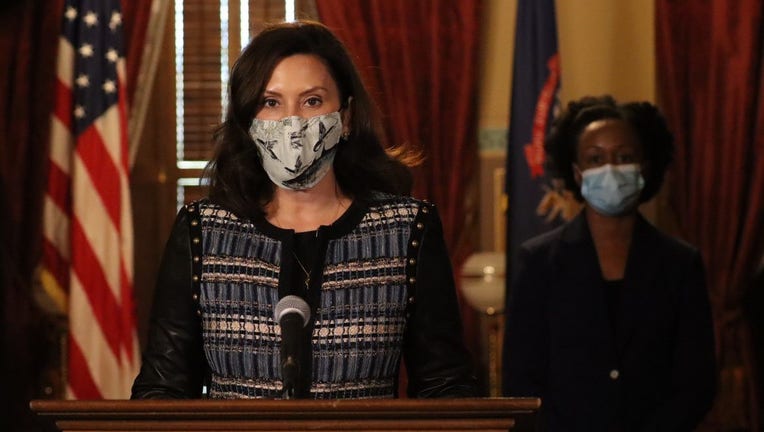 (FOX 2) - Michigan Gov. Gretchen Whitmer spoke Thursday amid ongoing election results in the country about the state of COVID-19 in Michigan.

Gov. Whitmer said Thursday she has sent a letter to state Republicans urging them to pass legislation to wear masks indoors and in crowded outdoor areas.

Whitmer says this is already law under the Michigan Department of Health and Human Service's epidemic orders right now, but that codifying the mask mandate in a bipartisan way would send a resounding message to Michiganders that we all have to do our part in slowing the spread.

"We do have a mask mandate in Michigan, it comes from MDHHS. It has the force of law. I want to reiterate that. Just because the Supreme Court did what they did doesn't change the seriousness of this virus, the prevalence of the virus," Gov. Whitmer said.

Gov. Whitmer said Thursday she has sent a letter to state Republicans urging them to pass legislation to wear masks indoors and in crowded outdoor areas.

She said officials have projection models that show deaths increasing back up to an average of 100 people per day by the end of December if we don't change anything in our curbing behavior right now.

Whitmer agreed the numbers are "very alarming" and said she expects she and Dr. Khaldun will begin doing news conferences more frequently again.

In Michigan, an average of 43,000 diagnostic tests was conducted daily the last week of October and into November with an overall percent positive rate of 7.5%.

Moreso, she added that many people - as many as 50% of cases right now - have no idea how they got the virus.

The Grand Rapids and Kalamazoo regions have the highest percent positive rate right now, over 9%.

Jackson has the lowest rate right now at 4.1%.

Overall, Michigan's daily case rate is 261 cases per million people per day right now. Dr. Khaldun said the state is reporting more than five times the number of new cases per day now than what was being reported in early September.

The Upper Peninsula has the highest case rate at 509 cases per million people per day.

The Grand Rapids region has a case rate of 370 cases per million people per day.

The Kalamazoo region has a case rate of 331 cases per million people per day.

The Detroit, Saginaw, Lansing and Traverse City regions have case rates over 200 cases per million people per day.

The Jackson region has the lowest case rate in the state right now at 193 cases per million people per day.

Dr. Khaldun said all regions are still seeing an increase in hospitalizations.

As hospitalization rates go up, expect deaths to follow in a few weeks.

Dr. Khaldun said the average right now is 19 deaths per day, twice what it was in the beginning of September. She said some projection models show deaths could be up to 100 per day by the end of December if our curbing behaviors don't change.

Dr. Khaldun said on Nov. 5 that local health departments are tracking 509 outbreaks across the state right now, the largest number since the state began tracking outbreaks.

On Monday, Sept. 14, the Michigan Department of Health and Human Services started tracking outbreaks in schools across the entire state.

Using data from 45 health departments, the updates will be released every Monday at 3 p.m. and will include K-12, college and universities, number of cases, and if the cases involved staff, students, or both. It does not include cases where the virus was contracted from outside of the school.

You can read about the latest outbreak data in schools here.