LANSING, Mich - Michigan lawmakers Wednesday swiftly proposed and passed a $62.7 billion budget that will keep spending flat thanks to a federal rescue and avoid major cuts that had been feared due to the coronavirus pandemic.

The bipartisan plan was unveiled in the morning and won final approval by day's end -- a week before the Oct. 1 deadline -- before going to Gov. Gretchen Whitmer for her expected signature. Majority Republicans skipped the normal monthslong routine of holding committee hearings and publicly offering counterproposals to the pitch the Democratic governor made in February -- before COVID-19 upended everything.

Instead, the sides spent four-plus weeks hammering out details in private after coming to a consensus on the budget picture three months later than usual. The process also was delayed to address a shortfall in the current fiscal year but was much smoother than a year ago, when there was an impasse over Whitmer's unsuccessful proposal to raise fuel taxes to fix the roads. 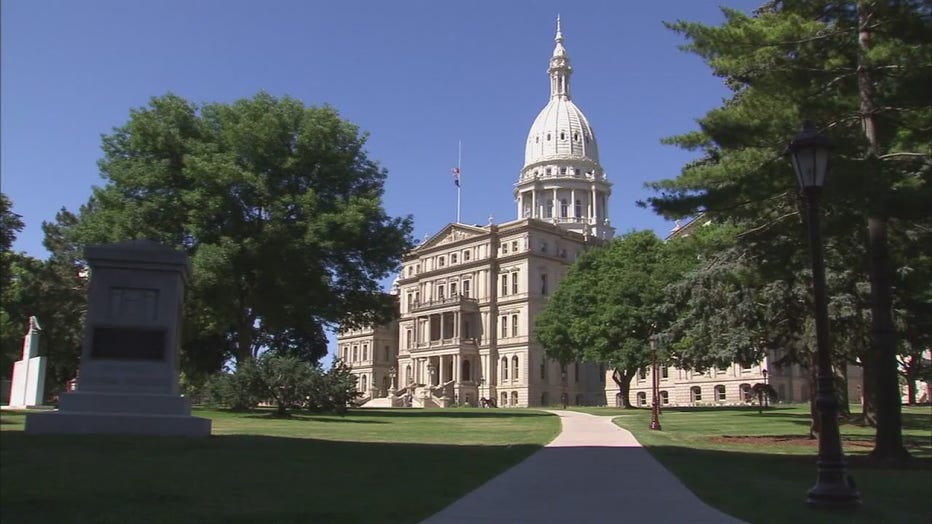 The Michigan Capitol Building in Lansing.

"Saying that the development of the 2021 budget has been difficult would be an understatement, but I am very proud that we've been able to work together with the Legislature to put together a budget that moves Michigan forward," the governor said in a written statement in which she thanked GOP leaders.

In the $17.6 billion education budget, which the Senate and House approved 36-1 and 103-2, K-12 will see a 1.4% funding boost. While base aid for traditional districts and charter schools will remain the same -- ranging from $8,111 to $8,529 per student -- they will get a one-time boost averaging $65 a pupil. Districts with increased enrollment will receive even more.

Support staff at schools will get up to $250 each to recognize their work during the pandemic. Legislators and Whitmer previously authorized $500 for teachers. The state also will pay a $1,000 retention stipend to first-year teachers who finish the academic year in districts with many low-income students -- $500 to other teachers.

The school budget "has so many things that we were very concerned would be" cut, said Republican Sen. Jim Stamas of Midland, chairman of the Senate Appropriations Committee. Negotiators prioritized education, he said.

Rep. Aaron Miller, a Sturgis Republican who chairs the House K-12 budget subcommittee, said school funding was protected because of "borrowed federal money" that "our grandkids are going to have to pay off."

Operations funding for universities and community colleges will remain unchanged, as will state revenue-sharing payments to municipalities.

In the $45.1 billion general budget, the governor and lawmakers agreed to restore funding she had vetoed in March to save money due to the pandemic. There will be $15 million to partially revive Pure Michigan, the state's tourism campaign; $30 million for a new program the governor has touted to provide financial assistance for adults age 25 and older to attend community college; $28.7 million for the Going Pro campaign, which helps businesses recruit students into the trades and other high-demand fields; and $31.3 million in earmarks, or "enhancement grants," for projects in individual legislative districts.

Cuts are planned, too. The Corrections Department, citing fewer prisoners and other changes, will in January close a Detroit location that houses parole violators and inmates who need dialysis. The Detroit Reentry Center employs 220 people.

Departments will trim a total of $250 million, largely through reductions in the multibillion-dollar Medicaid budget that will not directly affect services, said state spokesman Kurt Weiss. The general budget cleared the House 101-4 and the Senate 37-0.

The deal will extend for three more months a $2 hourly wage increase for "direct care" workers in nursing homes, home health aides and others during the virus outbreak. Nursing homes will receive $20 million in grants for protective equipment. Nearly 6,000 more low-income children will become eligible for subsidized child care.

Rep. Jon Hoadley of Kalamazoo, the top Democrat on the House Appropriations Committee, said he was particularly proud to fund new initiatives such as Healthy Moms, Healthy Babies to address maternal and infant mortality and the disproportionate racial impacts. Medicaid eligibility will be lengthened for new mothers, and in-home visits to at-risk families will rise.

"We should have more health care, not less, and this bill does that," he said.

As part of the federal relief package, the state government received $3 billion in assistance. Also, federally funded stimulus checks, supplemental unemployment benefits and forgivable loans to businesses have been credited with lessening the economic pain from virus-related shutdowns. Tax collections did not fall as much as initially projected.