Detroit police enlists help from above in crackdown of street racing

DETROIT - Michigan State Police got the chance to show off some of their high-tech infrared equipment this weekend when they spotted an illegal street racing scene.

In a video from a chopper above, state police zero in on a Dodge challenger doing donuts in a Detroit intersection Friday.

"I got a Challenger - he's doing real good donuts in the intersection now," said an officer viewing the footage.

State police would be successful in their arrest after tracking the suspect drivers from the intersection of Grand and Palmer to the freeway.

MSP was enlisted by Detroit police to help the city's latest effort to crack down on illegal street racing. Footage released by law enforcement shows the Challenger fleeing the intersection with its wheels appearing white-hot in the infrared camera. 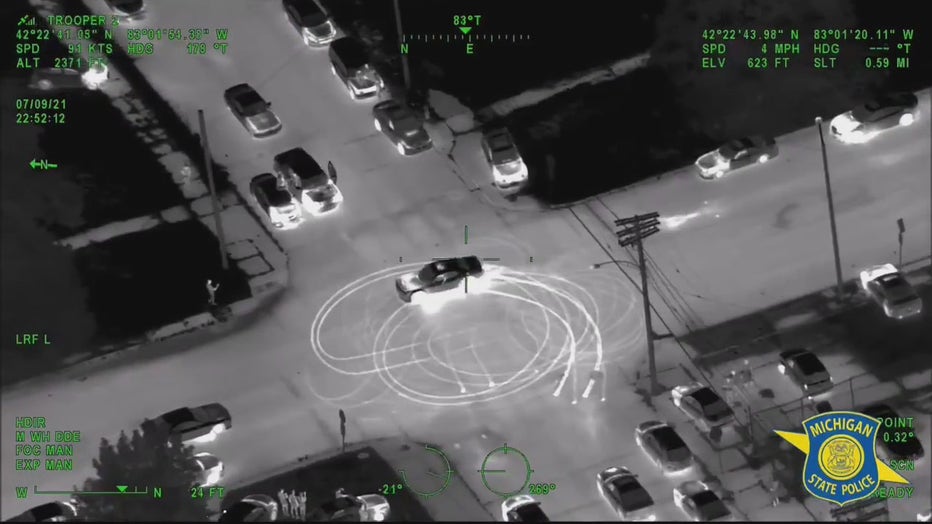 Police tracked the Challenger to a gas station where they attempt to refuel. After police attempt a stop, the suspects fled to the highway.

The scene Friday night took police from residential streets to I-96. After the suspects are immobilized, they leave the car and run across the highway, barely missing oncoming traffic.

Police also tracked the suspects on foot, enabling Detroit police to make arrests of the driver and one of the passengers.

The scene remains under investigation as one suspect is still missing.