DETROIT - More arctic air is expected to drop conditions across Metro Detroit this week, with temperatures hovering in the teens and dropping at night.

Arctic air descending on Southeast Michigan for the next week will keep day time temperatures in the teens, however, wind chill could mean an even colder conditions.

There's likely also snow to be on the way Monday and Tuesday as well as some below-zero winter conditions before the week's end as well.

That means keeping track of your home's temperature and car's functionality as well.

For your weekly forecast, count on at most 1-2 inches of snow in northern Oakland County for Monday night while temperatures remain mostly in the teens. In fact, you can expect that to be the case for most of the week, with temperatures getting up into the 20s on Thursday. 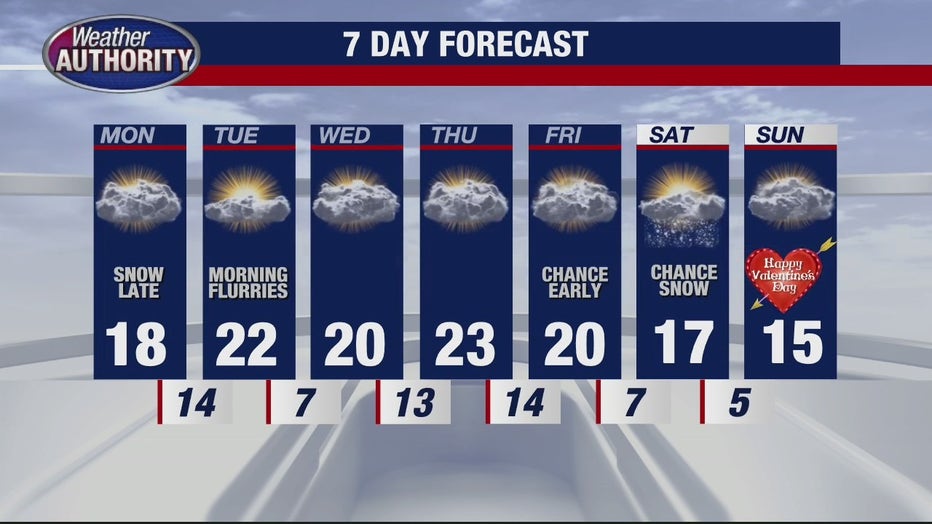 However, wind chills are expected to make conditions feel well below zero.

The cold weather prompted Triple A to issue an Arctic Air Advisory for Michigan.

With expectations that temperatures will reach some of their coldest this year, the focus turns to vehicle functionality, which extreme cold can wreak havoc on.

A few tips for those with a car or truck: make sure the battery is fully charged, enough gas is in the tank, and that there's enough windshield washer fluid. Also, be ready for frozen doors and park inside a garage if you can. Tarps can also protect vehicles from the wind.

As an additional warning, several warming shelters will open around Detroit and the metro region due to threats of the cold.

We'll see some snow tonight too!