These moths got the attention of customs and border protection at Detroit Metro Airport - the first encounter with the species since it was described in 1912.

ROMULUS, Mich. (FOX 2) - A moth species not seen in the U.S. in more than a century was discovered by federal border protection agents at Detroit Metro Airport during an inspection of a passenger's personal baggage last year.

A passenger arriving from the Philippines in September 2021 was stopped by agriculture specialists with the U.S. Customs and Border Protection. During an inspection, agents found seeds that would eventually hatch into "very flashy" moths.

Experts determined the moth was from the Pyralidae family, which is casually known as a snout moth. While there are over 6,000 species of the moth worldwide, only about 600 exist in the U.S. and Canada.

The passenger carrying the 'seeds' first told officials they were pods that would be used for medicinal tea. But "upon closer inspection, apparent insect exit holes were discovered in the seed pods." 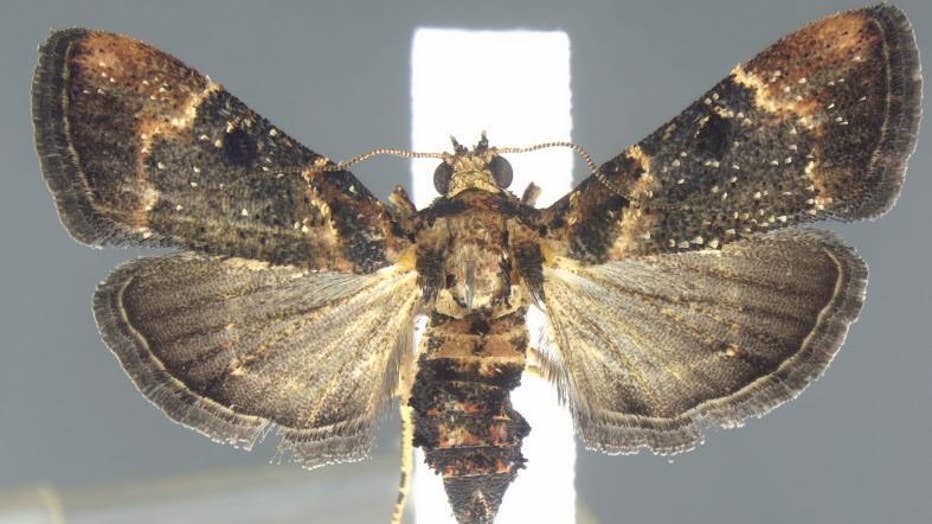 Photo courtesy of the U.S. Customs and Border Protection.

Then, while in quarantine, several of the eggs hatched, revealing moths with raised black bristles. According to a release from USCBP, the physical characteristics indicated it was a species of the family Pyralidae. However, the genus couldn't be determined at the time.

Further identification was conducted by an etymologist at the U.S. Department of Agriculture Smithsonian Institution. The expert later determined it was a species of moth first described in 1912 - 110 years ago. This was also the first time that the larvae of the moth species had been collected.

"Agriculture specialists play a vital role at our nation’s ports of entry by preventing the introduction of harmful exotic plant pests and foreign animal diseases into the United States," said Port Director Robert Larkin. "This discovery is a testament to their important mission of identifying foreign pests and protecting America’s natural resources."

It's unclear what kind of threat the moth species poses to the U.S.

The impacts of invasive species, while well-known among animals that have already established themselves in the U.S., can often prove difficult to determine prior to it emerging in the country.