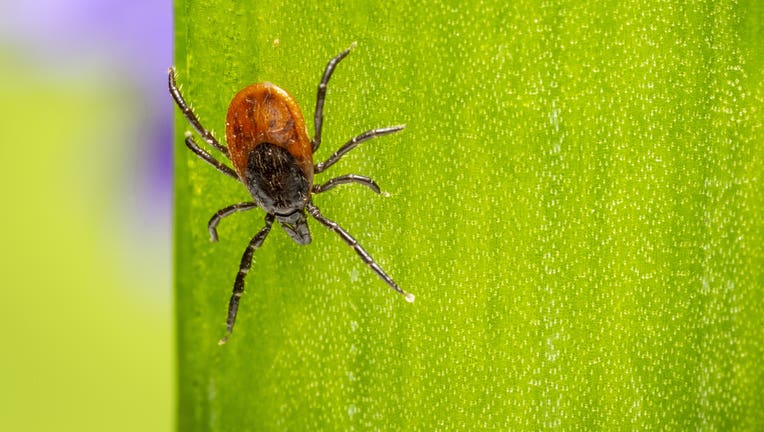 (FOX 2) - Michigan could see higher-than-usual activity among ticks in Detroit, as well as high risk levels for infection of Lyme disease throughout counties in the southeast area of the state - according to a group that tracks the threat that parasites pose to the health of pets and people.

A forecast published by the Companion Animal Parasite Council said that the western Upper Peninsula will have a high infection risk for diseases carried by ticks, including Lyme and anaplasmosis in the month of May.

That's because the tick species Ixodes has continued moving into Michigan from the northwest and is expected to spread into southern counties throughout the rest of the year.

That's a problem for unsuspecting residents and especially pet owners, Dr. Rick Marrinson of the CAPC said. "Lyme Disease and Ehrlichiosis are serious threats to pets in Michigan that are increasingly vulnerable to these debilitating and potentially fatal illneses."

Ehrlichiosis, like Lyme, is a bacterial infection that transmits through a tick bite. They can infect both dogs and their families and left untreated could spur severe neurological and heart problems.

Wayne, Washtenaw, Macomb, Oakland, and Livingston counties are all showing increased infection risk from tick-borne diseases in 2022, CAPC said. The reasons range from increased travel with pets to shifting wildlife populations and their movement into previously uninhabited space.

Climate change and shifting temperature conditions have played a role in that movement. So has habitat change due to humans.

As the threat of exposure climbs, experts say the prevention strategies that pet owners can take should be increasingly utilized.

MORE: What Ford Cove will look like after restoration

"Over the years, we’ve seen the risk for parasitic diseases increase and expand into areas that have had historically lower prevalence," said Dr. Christopher Carpenter, the CEO of CAPC. "CAPC’s monthly Pet Parasite Forecasts are critical to alerting pet owners to the risks and reinforcing CAPC’s recommendation that all pets need to be annually tested and protected year-round."

The one and only, Mike Palmer, from Premier Pet Supply joined us to talk about what we can do to help prevent ticks and fleas from jumping on our furry friends as we head into the spring and summer months.

According to the current forecast for the next 30 days, the expected infection rate among dogs is about 4.14%. Much of west and northern Michigan are under the highest threat level. Readers can find the map here.

What happens when pets are bitten by ticks?

The diseases that scientists are most wary of that come from ticks are Lyme disease and Ehrlichiosis, both bacterial infections that humans and dogs can contract.

Many dogs that are bitten won't show any signs of an infection. But for those that do, symptoms could be fever, depression, loss of appetite, lethargy, joint pain, and stiffness.

Can pet owners get Lyme disease from their pet?

No. Bacterial infections transmitted from a tick bite cannot pass from the pet to its owner, or from an owner to their pet.

However, CAPC warns that the places where pets are increasingly under threat from being bitten by a tick are also places where humans are more at risk.

What should pet owners do?

The first person that worried pet owners should do is talk to their local veterinarian about testing for tick-borne diseases and year-round prevention. Diligent checking for ticks through a dog's fur can also be helpful.

One of the most important things pet owners can do to protect their pet is to vaccinate against Lyme.

Beyond that, being aware of the risk level of ticks and periodically checking for them on their pet can go far in preventing further spread.