DETROIT (FOX 2) - In the wake of the shooting death of 2-year-old Brison Christian, who was killed on I-75 in a case of mistaken identity, Michigan State Police and Detroit Police have announced a new initiative to cut down on the use of guns on southeast Michigan freeways.

Detroit police, state police to crack down on freeway shootings in memory of 2-year-old Brison Christian

Operation Brison was announced Tuesday amid a surge in freeway shootings, including a recent one that took the life of 2-year-old Brison Christian.

During a press conference on Tuesday, Interim Detroit Police Chief James White and MSP Lt. Mike Shaw announced Operation Brison, named for the boy who was killed last Thursday night. Brison was with his father, mother, and brother as they left a basketball practice in Dearborn when their pickup truck was shot multiple times on I-75.

Brison was shot in the head and was rushed to the hospital in an MSP car where he was later pronounced dead.

BJ was shot in his left arm and was treated that night and released from the hospital.

White commended Brison's father, Brian, for the way he's conducted himself after the murder of his son.

Brison Christian's father, Brian, wants his son to be face of freeway shootings

The father of Brison Christian said after his 2-year-old was shot and killed by a gunman on I-75, he wants his son to be the face of freeway shootings so people can remember him and preserve his memory.

"The way that Mr. Christian has conducted himself in this - is strength that I have never seen and he should be applauded," White said.

Saying that he could never find appropriate words for Brian or his family, he said that Brison will never be forgotten.

Brian commended the work of DPD and MSP for the investigation.

"The way that you guys acted and put the case together fast to help us find peace with the situation, I couldn't thank you guys enough," Brian said.

He also said that when police said that the shooting was a case of mistaken identity, it gave him some sense of closure.

"I probably wouldn't be here today if I would have found out that someone killed my baby because of something I did," he said.

In response to the high level of recent freeway shootings, White unveiled Operation Brison which will have an emphasis on watching out for violence on the freeways.

Operation Brison will use air support and patrols on freeways to look out for road rage incidents and violence.

White said he would work and coordinate with police forces in suburban Detroit with main freeway arteries through their cities.

Shaw said that both departments would use every piece of technology they can to put an end to violence and said the much-maligned Project Green Light was key to the arrests.

"Anybody who talks about the Green Light camera system just doesn't know what that did for us to bring these people into custody," he said. "We locked up 2 people today with the help of the Green Light system."

Project Green Light, which installs high-definition cameras at Detroit gas stations and other stores, is not used on freeways. Shaw would not elaborate on how the system was used to lead to the arrests.

White said Operation Brison serves to purposes: putting an end to violence on the highways but also preserving the little boy's memory and the life he didn't get to live. 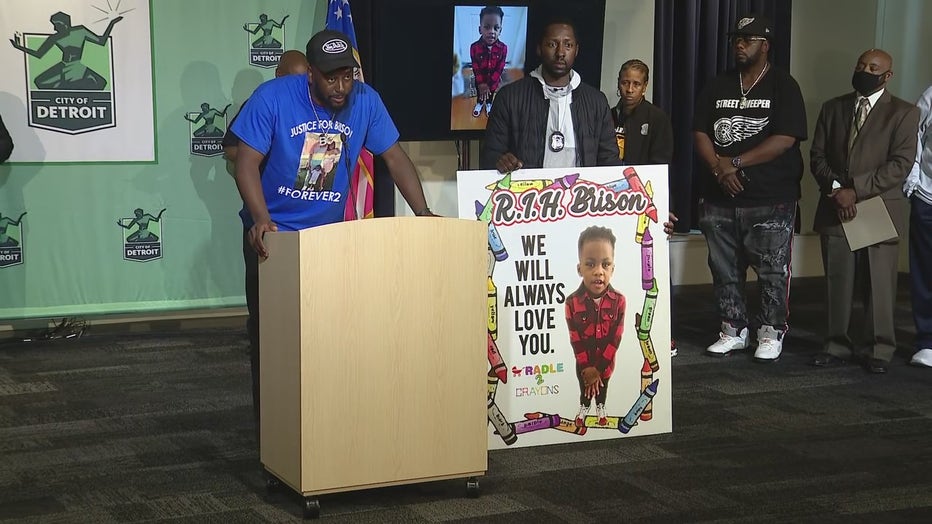 Michigan State Police and Detroit Police announced Operation Brison to cut down on freeway violence in and around Detroit.