Suspect who was killed after shooting at state police helicopter, troopers was Lincoln Park man

Investigators say at around 7:30 p.m. the helicopter was circling around the 12000 block of Terry street near Tyler Avenue. Trooper 2 personnel called in a laser flashing that was targeting the helicopter. It was followed by shots fired.

FOX 2 (WJBK) - A 33-year-old man from Lincoln Park is dead after police say he fired shots at the state police helicopter Trooper 2 while it was patrolling Tuesday night.

Michigan State Police say the outcome could have been far worse, had the suspect caused the pilot to crash - as first he allegedly shined a laser at the craft, then opened fire with a long gun.

"If the pilot had been blinded and crashed into this neighborhood, it would have been a lot worse," said 1st Lt. Mike Shaw, MSP.

Investigators say at around 7:30 p.m. the helicopter was circling around the 12000 block of Terry street near Tyler Avenue. Trooper 2 personnel called in a laser flashing that was targeting the helicopter. It was followed by shots fired.

Police say the suspect, whose name has not been released yet, continued firing shots from the second floor of a house.

"People don’t realize the seriousness of firing a laser at our aircraft or any aircraft," said Shaw.

Police quickly locked down the now-deceased suspect and engaged.

"Troopers returned fire," Shaw said. "The suspect was hit and went down. We had our emergency support team show up, and went up to approach the house. There were concerns because he was still armed and was laying there."

"We’re in the process of gaining some search warrants, so we can go through the house," Shaw said.

Police say it’s not just the suspect's actions that were concerning. It’s what they later found inside the abandoned house.

"They found multiple weapons and ammunition stashes throughout the home as if it were set up for some type of ambush or security purposes or whatever," Shaw said.

Investigators found six firearms inside, that includes the one he used to target the helicopter. We’re told no troopers were injured and the helicopter was not damaged.

"Anybody that thinks that that’s a joke or you’re just trying to see what would happen, the potential there is bringing that aircraft down," Shaw said.

Police have not learned the motive, but a neighbor did say he recently moved in with a dog, which is now with animal control. 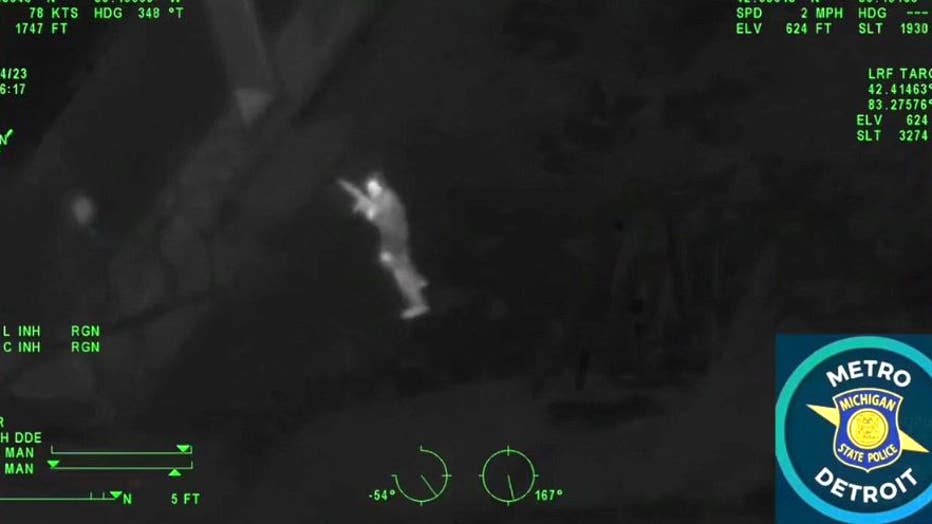