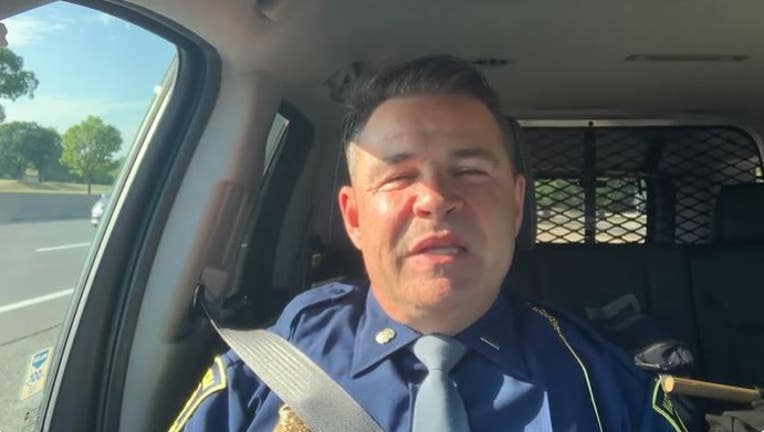 Michigan State Police 1st Lt. Mike Shaw sits in an MSP car during a speeding enforcement on the Southfield Freeway on Thursday, July 28.

DEARBORN, Mich. (FOX 2) - Michigan State Police have "been busy" on the Southfield Freeway. Anyone who's made the drive up or down the Southfield Freeway has seen those obvious signs on the side of the road. You know, the rectangular white ones with the black lettering that reads ‘speed limit 55 MPH’. The same ones that, it seems, most people ignore.

If you've ever been going 55 MPH, or even 5 over at 60 MPH, on the Southfield Freeway, you've inevitably seen cars rapidly approach from the rearview and fly past you. It's a fact. The speed limit might say 55 MPH but many drivers blatantly disregard that posted sign. If you're one of those drivers, this is the day to pay attention.

Michigan State Police Lt. Mike Shaw admits that the Southfield Freeway is an easy place for speeding drivers to lay the hammer down because of the narrow shoulders and lack of a safe place for police to pull you over.

"One of the places that we get the most complaints from people that live in this area or travel back and forth to work is the Southfield Freeway," Shaw said. "A lot of people realize that the freeway is 55, but this is a very tough area to do any type of enforcement, due to the fact that the shoulders are very small and very narrow. It makes it a lot harder to pull people over safely."

Those narrow shoulders are precisely why the speed limit is 55 MPH.

Shaw recorded a video from the passenger seat of an MSP car on the freeway near Ford Road around 9 a.m. and said those speeding drivers often dive into those shoulders for safety when they come up on a crash.

That's why MSP is enforcing on Thursday. When reached for comment around 11:15 a.m., Shaw said they don't release full numbers until the end of the enforcement but said they have been "very busy today".

"Anybody that’s driven the Southfield has seen the rush hour. People darting off to the shoulder there because they’re driving too closely to the car in front and can’t stop, or they’re driving so fast and they go over one of the dips in the freeway and next thing the traffic’s stopped in front of them and they’re involved in a rear-end crash or end up trying to jump onto the shoulder," Shaw said.

Of course, the shoulder isn't safe because that could be where someone is changing a tire or an abandoned vehicle has been left behind - creating even more havoc.

And before you say you "can't do 55 on the Southfield", well, Shaw says if you're that person, they're not cutting much slack.

"If you get stopped, you’re probably going to get a ticket today," he said. "The speed limit is 55. We get a lot of people who say you can't do 55 out here. We're not going to punish those that are following the law, we're punishing those that are breaking the law."

Shaw recorded the video as a warning to drivers on the freeway and ended it with a nice reminder to all drivers.

"As always, be nice when you're out here on Michigan's freeways. Drive Michigan safely. 55 is the way to go. Hopefully, we will not see you out here today," he said.