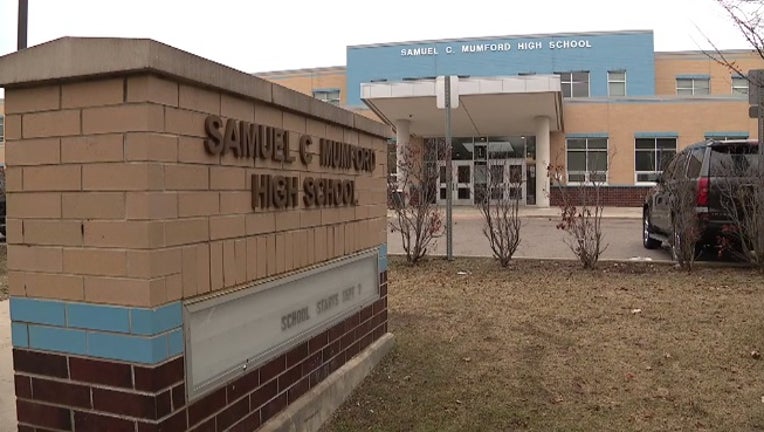 DETROIT (FOX 2) - A swimming teacher at Detroit Mumford High School has been placed on administrative leave after a 15-year-old was found at the bottom of the pool on Monday and later pronounced dead.

The Detroit Public Schools Community District announced on Tuesday that the swimming teacher was placed on leave pending the conclusion of the investigation.

Teaching staff found the 15-year-old at the bottom of the pool on Monday. According to school officials, the certified swimming instructor began CPR on the teen after pulling him from the pool unresponsive.

The teen was taken to the hospital but later pronounced dead. Swim classes at the school were canceled until the investigation is concluded.

Teen dies after being pulled from Mumford pool

Monday afternoon a 15-year-old died at the hospital after being pulled from the swimming pool.

DPSCD Chair Dr. Iris Taylor and Superintendent Dr. Nikolai Vitti released a statement announcing the teacher was placed on leave and said that, if the investigation reveals wrongdoing, all personnel or students would be held accountable.

"Yesterday's loss of one of our students during school hours and at one of our schools has been one of the most difficult incidents we have endured as a School Board/Superintendent team. We are committed to determine what caused this tragic loss at the highest level of transparency once the facts surface regarding what occurred. If the conclusion of the investigation reveals any wrongdoing then we will be sure to hold any and all personnel or students accountable. At this point, the swimming teacher has been placed on administrative leave pending the conclusion of the investigation or the surfacing of more facts regarding the incident. "

The school district is providing grief counselors as requested for students, staff, and parents.

The district also said they will be transparent in the results from the investigation.

"We commit to fully updating the media and community about the incident once additional facts surface. We have nothing to gain from hiding the truth of this devastating loss. We owe our student, his family, and the Mumford community the truth and justice they deserve - and we are fully committed to that conclusion."