The stories came out of the Ritz Carlton Hotel in New Orleans where earlier this month the Democratic Governors Association held a meeting and Gov. Whitmer was center stage.

LANSING, Mich. (FOX 2) - The national media continues to do stories on the possibility that Michigan Gov. Gretchen Whtimer may be a presidential candidate in two years even though she has told FOX2's Tim Skubick she is not running.

If President Joe Biden does not run for president again, the national news media is ramping up speculation on who might run.

The picture appeared in an article from the Huffington Post outlining all the possible Democratic presidential contenders including this quote: "How about taking another run at electing the first women to be president - meet Michigan Gov. Gretchen Whitmer."

The stories came out of the Ritz-Carlton Hotel in New Orleans where earlier this month the Democratic Governors Association held a meeting and Gov. Whitmer was center stage.

A picture of the governor at the podium with two other Democrat governors at her side, in the Politico story entitled, "Democrats Elect a Class of young governors. They might be the future of the party."

And in the piece, they quoted the governor saying, "It is a very deep bench now of leaders who are executives who have to solve problems."

But there were no quotes from her saying that she will not run - which of course, keeps the speculation alive.

But recall what she told Tim Skubick in a recent interview.

"I'm not going to run for president in 2024. Period," Whitmer said in that interview.

Michigan Gov. Gretchen Whitmer: "I'm not going to run for President in 2024"

And the governor could also have told the national media this, but she didn't.

"I'm not running for anything in the next two or four years," she said.

Of course had she said that in New Orleans, somebody else's picture would have been under that heading of presidential material. 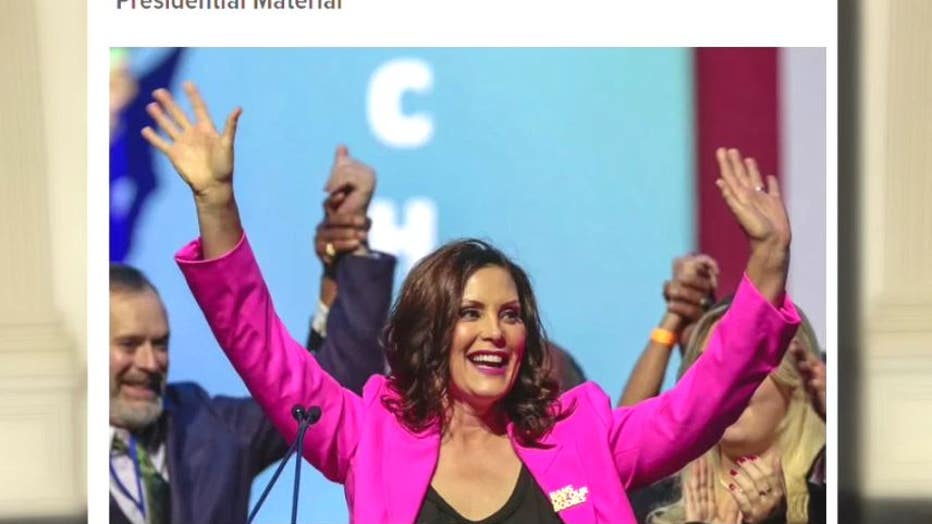