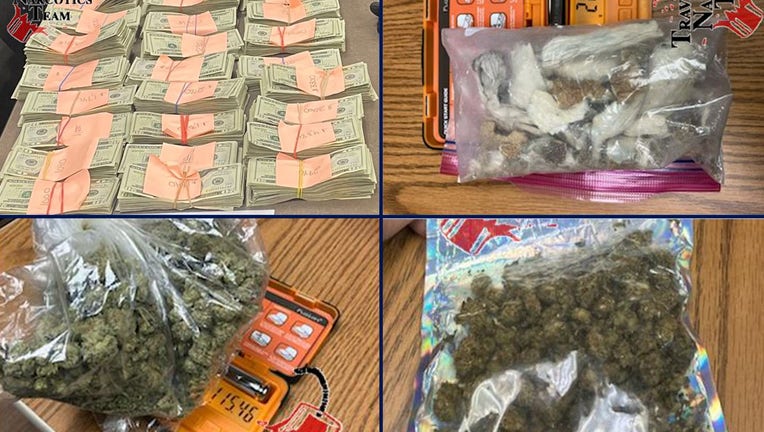 MISSAUKEE COUNTY, Mich. (FOX 2) - An Ohio man who cut his tether following a drug arrest in northern Michigan was later located in a nearby city where he fled after trying to break into a residence. He was located by a Michigan State Police K9 unit after a lengthy search.

Jeffrey Charles Rebarchek of Findlay, Ohio was already sought by authorities for an aggravated assault in Wexford County when he was pulled over while traveling in adjacent Missaukee County. During the July traffic stop, police found tens of thousands of dollars, more than a pound of marijuana, and hallucinogenic mushrooms.

It was all seized under the Controlled Substance Act.

However, while waiting for his court date Rebarchek cut his tether and fled the area, failing to appear in court.

The suspect's arrest happened months after the initial traffic stop.

Missaukee County Sheriff's Office first stopped Rebarchek while he was driving on July 4. Authorities located $81,000 in cash and a large quantity of marijuana. At this point, deputies requested help from the Traverse Narcotics Team.

As the suspect was lodged in the Wexford County jail on assault charges, detectives executed a search warrant on the vehicle, finding 1.6 pounds of pot, 25 grams of psilocybin mushrooms, "and other evidence of narcotics trafficking," a release from TNT said.

After being released on bond, Rebarchek cut his tether and failed to appear in court, prompting a failure to appear warrant being issued for his arrest.

On Sept. 6, Missaukee County deputies responded to an address in Lake City for a report of an attempted breaking and entering. At the time, a man fled the scene. Several Michigan State Police teams responded and after a lengthy search apprehended the suspect.

Rebarchek was found in possession of 20 grams of meth and more cash.