Whitmer, Republicans in Legislature remain divided on how to fight COVID-19

One year into the COVID-19, and Gov. Gretchen Whitmer and Republicans in the Legislature are still divided about how to fight the virus.

LANSING, Mich. - Michigan's year in review was like nothing ever before as Gov. Gretchen Whitmer discussed the wake that the coronavirus left the state in last March.

And in an almost serendipitous reminder of the year residents just experienced, state health metrics noted that cases have climbed back up slightly.

On the one-year anniversary of the state's first cases, Michigan has more than 600,000 cases and has lost more than 15,700 lives to the virus.

Test positivity, case rates, and hospitalizations dedicated to COVID-19 patients have climbed back up.

Dr. Joneigh Khaldun said that in addition to the increase in new cases, there are more than 500 infections linked to the B.1.1.7 variant. Another, more deadly version of the coronavirus that originated in South Africa was also identified in Jackson County this week as well. 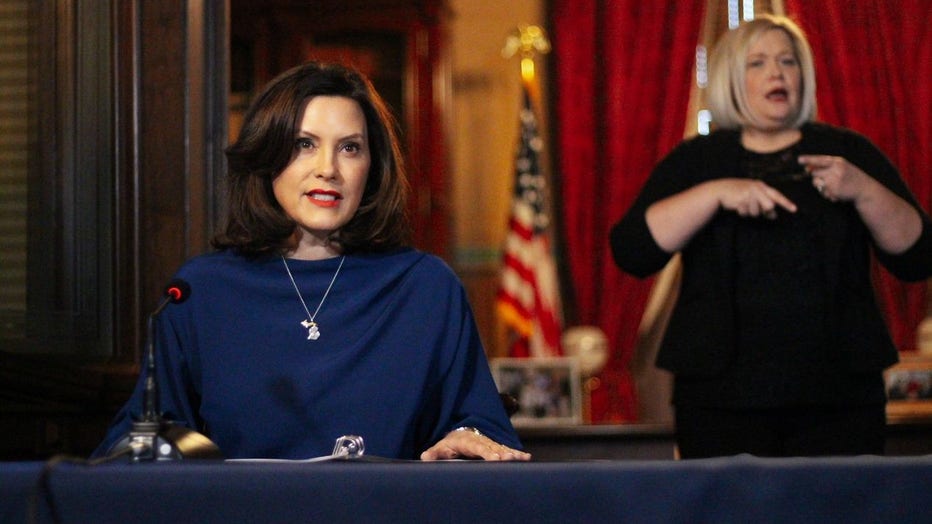 "If these new variants become more prevalent, we risk a rapid rise in cases and deaths," Khaldun said.

Both the chief health officer and Whitmer said the increase is a reminder that as the state bolsters vaccine coverage, concerns about the virus remain.

Whitmer also made a request for residents to turn their front porch lights from 8-9 p.m. tonight to honor the victims of the pandemic.

While COVID-19 had found its way to the U.S. long before it was identified in Michigan, the day that cases were identified in Wayne and Oakland County preceded a World Health Organization announcement that the situation had developed into a global pandemic.

What followed was a week of mass cancelations and uncertain futures as the stock market took a tumble and sporting events were canceled indefinitely.

"We are Michiganders. We are tough. We will get through this. Until then make sure you and your families will take the necessary steps to stay safe," Whitmer said during a late Tuesday night press conference on March 10 when she announced a state of emergency.

The first health precautions that the government offered were to wash hands thoroughly, tough your face as little as possible, and use elbow bumps instead of handshakes. The evolution of mitigating the spread would eventually navigate to face mask-wearing and social distancing.

But before those measures were codified, state and city leaders were scrambling to prepare their constituents for an unknown year. The result would be a catastrophic public health crisis that killed nearly 16,000 Michigan residents and 527,000 Americans - an incredible loss. The pandemic year will likely leave an indelible imprint on people's minds for years to come.

But as fast as the virus arrived, so did treatments and eventually a vaccine. So far, more than 2.5 million shots have been administered in Michigan. As of March 10, 1.7 million people had been fully vaccinated.

After a bungled rollout marred by a supply shortage, vaccine distribution has ramped up significantly and with it, new eligibilities for more residents.

Detroit Mayor Mike Duggan announced during his State of the City address that every resident who wants a vaccine will be able to get one by May. Then earlier today, sources told the Associated Press that President Joe Biden plans to announce an additional 100 million Johnson & Johnson vaccines will be purchased by the U.S.

But even with the successes, the trials that Michigan residents have been through have been stark. FOX 2 is documenting many of those stories this week on the anniversary of the pandemic's arrival. You can read them below: