Comerica Park can now fill every one of its 41,000 seats again

It's been more than a year and a half since Comerica Park had a full house. That's about to change as pandemic restrictions are now off of outdoor venues.

DETROIT - Comerica Park and the Detroit Tigers are about to celebrate round two of the opening day Tuesday.

Their home game against the Seattle Mariners will be their first without any capacity restrictions. That means instead of 8,000 fans dotting the arena, crowd numbers could reach as high as 40,000 or more.

And in the spirit of shedding the restraints initiated due to the pandemic, people can get free tickets to the game if they get vaccinated that day as well.

Outdoor capacity restrictions were lifted for events and businesses on June 1. Gov. Gretchen Whitmer announced the plan in May after shifting course away from the original Mi Vacc to Normal schedule.

However, Comerica Park hasn't been filled because the Tigers' last home game was May 30. Their series against the Mariners will be the first played in front of an unrestricted crowd.

"Live Major League Baseball there's nothing like it," said George Brown, who picked up tickets at the box office Monday afternoon. He's been a lifelong fan.

But the return of the downtown energy in Detroit will also bring a lot of badly-needed income to businesses. Kyra Spires who works as a tour guide for the Detroit Rolling Pub said business was steady through the pandemic. But "I know it will be booming now that the Tigers are opening back up."

"It's beautiful to see Detroit is coming back to life again, coming back from last year," she said.

For this week's games, anyone unvaccinated can get a shot and score two free tickets to the game.

RELATED: How to score 2 Detroit Tigers tickets for free

The Detroit Tigers are doing a BOGO deal and are partnering up with McLaren Health. Anyone who schedules an appointment or walks in to get a shot will also receive two vouchers for tickets to that day's game or a future game. They'll also receive a $10 gift card to Meijer. 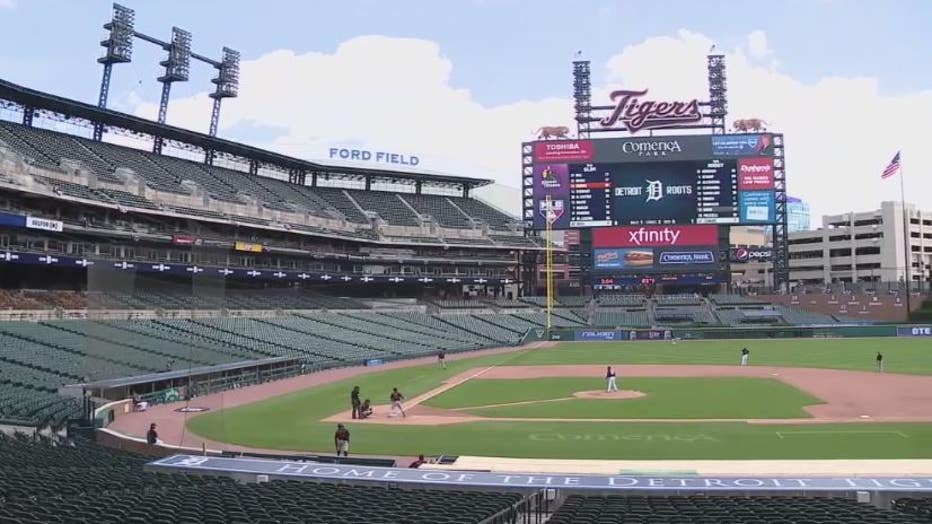 The pop-up vaccine clinic, which will be held at the Fox Theatre, will be administering shots three hours before the start of each game this week.

Tuesday's game will start at 7:10 p.m.. Matthew Boyd will be pitching for the Tigers against Marco Gonzales for the Mariners.