That's what Rebecca Kiessling screamed over the phone after receiving a call about her two sons, Kyler and Caleb. The brothers had been found dead with another deceased woman in a deadly drug overdose in an Auburn Hills hotel room.

Police had originally got a call to do a welfare check on a 17-year-old girl from Rochester Hills at the Baymont Hotel. When they entered, they came across the three deceased people, along with another unconscious man from Lake Orion.

"You know, I did everything I was supposed to do to stop this," Rebecca said. Both she and her husband Bob say their adopted sons had been addicted to Xanax for years.

Only hours before the boys were found, Bob had grown concerned and had called the probation department, worried that one of them was in violation. "...I'm concerned (for) his safety and the safety of others," he recalls telling a probation officer. But a call didn't come back until Thursday morning when it was too late.

The triple overdose is among this year's starkest reminders of the dangers of addiction and the reason both Bob and Rebecca are talking about their son's departure.

Auburn Hills are investigating after three people were found dead and a fourth unconscious at a motel in Auburn Hills.

While the opioid epidemic has remained one of Michigan's and the country's trickiest issues combatting, the pervasive addiction has actually grown worse over the past few months. During the pandemic, emergency medical services have responded to more calls related to opioid overdoses since April. From then until June, EMS calls for overdoses have risen 26% - reversing what had been years of progress in Michigan when overdose deaths fell for the first time in six years in 2019.

Because COVID-19 has already strained medical and substance abuse resources, the issues related to addiction have become exasperated.

Auburn Hills police say in addition to the discovery on Wednesday, officers had also responded to two other overdose calls.

"And then just a short time ago we were dispatched again to the Baymont and unfortunately when we checked on the well-being of that individual, he's deceased," Baker said. That's now seven overdoses and four deaths in one day.

A fourth officer-involved shooting ends with another fatality

In the month's fourth officer-involved shooting, Detroit police responding to an unrelated call came up to an intersection where a man wielding a large sword was spotted.

When the officers exited their vehicle, the man began "wildly" swinging the sword, while dressed in some sort of protective gear. After refusing several orders to drop his weapon, an officer deployed his taser. It wasn't enough as the man then took out a second weapon - an 8-inch dagger.

Throwing it at an officer, he was hit right below the eye.

Detroit Police Chief James Craig, who was at the scene an hour afterward, said the police continued to instruct the man to drop the sword before the second officer fired a shot, hitting the suspect.

A suspect is dead and an officer wounded by a dagger hitting below his eye is expected to be okay after a fourth police-involved shooting in Detroit happened Thursday night.

At some point during the incident, the suspect also climbed into the driver's side door of the police vehicle. That's when a good Samaritan in their own car drove up and blocked the door so the suspect could not get out of the car.

After being subdued, the suspect was taken to the hospital, where he later died, Craig said.

It was only a day before when Operation Legend was officially launched in response to the growing trend of violent crimes taking place in Detroit and other major cities. Many large police forces have noticed a spike in violent shootings and aggressive actions being taken toward law enforcement. 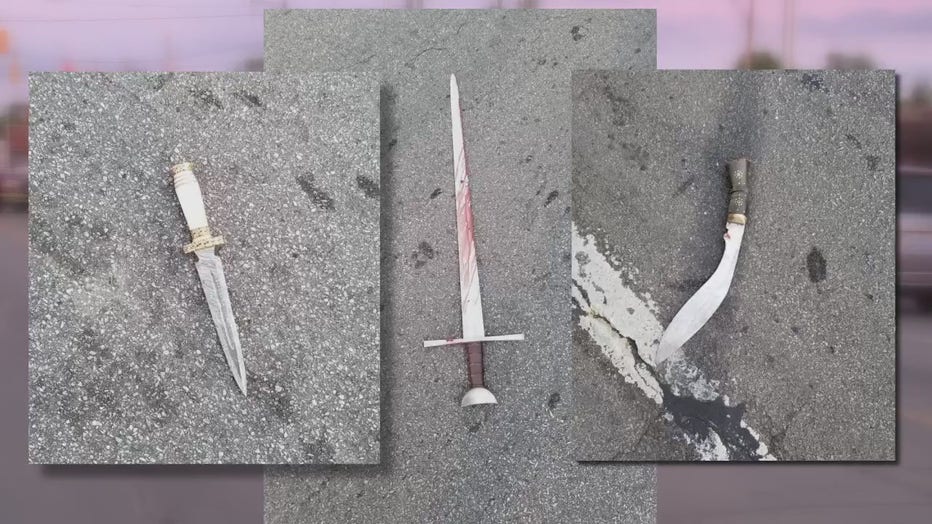 Particularly targeting gun violence, federal agents from several departments have been added to Detroit to remove illegal firearms from the street.

While it's not entirely clear what is pushing that trend upwards, several members of law enforcement, including Craig, have attributed it to a combination of anti-police rhetoric, the early release of incarcerated individuals, and issues with bail reform.

Landscaper found dead in backyard believed to have been stung

A west-side police investigation into the discovery of a body at a home on Vermont Street is leading police to suspect the man was attacked and stung by bees or wasps.

"This is not something you expect to happen on your day-to-day business," said realtor Tom Ball. He's selling the house for an out-of-state client and was able to piece together what happened by talking to neighbors.

The homeowner had hired a landscaper to do their yard work on Tuesday afternoon. Ball thinks while he was trimming the hedges, he "bumped" into a nest of some kind.

Police investigating after body found in backyard of Detroit home

Police are investigating after a body was found in the backyard of a home on Vermont Street in Detroit, where it's believed the man was stung to death.

It's believed the man actually ran into the backyard to escape the insects. He's presumed to have died from being stung.

A 43-year-old Livonia man who was doing donuts on Ford Road in Westland eventually had to be pulled out by police after his vehicle caught fire.

Believed to be under the influence of controlled substances and driving erratically in the middle of the road, police say they could see the driver's face as he spun around in circles, back on June 21.

"I'm telling you, this guy is conscious. He's smiling at me," said one of the officers dispatched.

"Either he's having a really good time or possibly he's not in a clear mental state," assessed police Lt. Bob Wilkie, while watching footage of the incident after.

Eventually, the minivan does stop and the hood begins to smoke. Officers tried to help the man out, but he refused.

Police say the man did not appear to be in a clear mental state and, as a result of this, was placing his life in danger by refusing to get out of the car.

As the fire grew, officers attempted to physically remove the driver as the flames and fumes from the fire posed a clear risk to his life. The driver continued to fight against officers and appeared to not comprehend the danger that he was in. He even pulled out a razor blade and held it toward the officers.

Officers backed away and negotiated with the man to exit the vehicle. He eventually complied.

"We do go through de-escalation training, we have been doing that for a while," said Westland Police Lt. Bob Wilkie.

The driver was taken to Garden City Hospital where he was checked for additional injuries and released back into police custody shortly thereafter. The driver has since been released from custody pending the results of a blood test.

Fantastic Friday weather with some rain to finish the weekend.

Next week we're cooling down!

Posthumous letter from John Lewis published on day of his funeral

The late Rep. John Lewis, D-Ga., has been honored by the nation through memorial celebrations all week, but Lewis himself has one final message in the form of a letter to the nation that was published by The New York Times Thursday morning.

The letter, which can be read in full here, contains a message of hope for the future, as Lewis said he was inspired by those who have stood up for equality after the death of George Floyd on May 25 while in the custody of Minneapolis police.

"While my time here has now come to an end, I want you to know that in the last days and hours of my life you inspired me," Lewis wrote. "You filled me with hope about the next chapter of the great American story when you used your power to make a difference in our society."