DETROIT (FOX 2) - Detroit police chief James Craig held a press conference Monday to address the third officer-involved shooting in Detroit this month, as well as what he called an uptick of violence in the city. He says he believes anti-police rhetoric, along with changed bail and release policies due to the COVID-19 pandemic are contributing to more violent behavior in Detroit and in cities across the country.

"As I indicated, this is not isolated to Detroit. There are other cities that, when you hear me talk about COVID - what's the common denominator? Is it because someone's been locked down in their home? Or is it because of early release? Individuals who are being released and, frankly and candidly, are we putting enough thought in who gets released from custody?"

He also brought up the uptick in violence as the reason behind Detroit getting more federal support in the coming weeks. Last week a memo from the White House said federal officers would be sent to Detroit and other major cities across the country in as soon as the next three weeks.

"We have not asked for the federal government to come in and manage our protests. Period. I don't know how many times I have to say that," Craig said - but he clarified that in December of 2019 he said he'd welcome federal support to enhance their fight against violent crimes the city is already undertaking.

Craig gave some statistics Monday at the press conference that he says give more context to the situation.

"Just this last week, you've heard me report we're averaging anywhere at a low of 80 [concealed weapons arrests] - this week was probably a high. We made a total of 128 carrying concealed weapons [arrests]," Craig said. "As my colleagues will tell you, we have not seen the number of handguns that we are seeing now."

All three police-involved shootings in Detroit in July also stemmed from officers being in the area to follow up on violent crime. 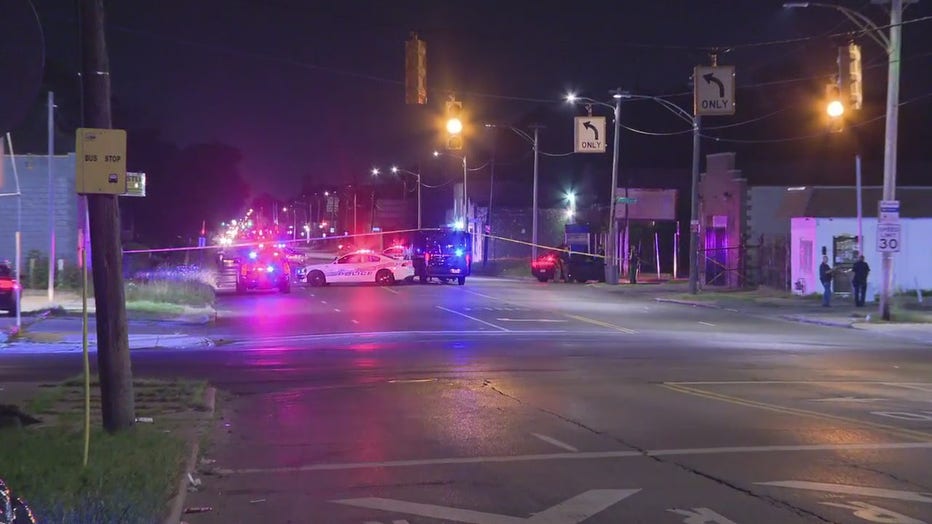 The scene of a police-involved shooting in Detroit the night of Sunday, July 26 in the area of Wyoming near Plymouth.

Craig said officers have seen emboldened suspects even prior to these recent police-involved shootings. He cited a situation on January 18, 2020 at Telegraph and Seven Mile in which a suspect tried to hit an officer. He also cited back in February when a person shot at police during a traffic stop.

"So, again, just an example of the senseless violence that our officers are encountering all too often," Craig said.

Craig also said the department is focusing heavily this summer, too, on illegal street racing and drifting in the community. He says violence has been associated recently with this activity too, most recently being that two onlookers were critically injured Sunday night when a driver lost control and hit them.

Related to illegal stunt driving, Craig said Monday that 430 citations have been issued, 93 vehicles have been towed and that 28 felony arrests have been made the last couple weekends. Eighteen of those arrests included carrying concealed weapons, Craig said.

"So you can see the hard work from our men and women who, every time we ask, they go out - not only putting themselves in harm's way but they honestly want to make a difference," Craig said. "There's cities that can't say that."

After giving the context of the heightened violence and number of illegal guns, and commending the hard work of his department, Craig wanted to make a point as mentioned earlier about federal support coming into the city.

"We have not asked for the federal government to come in and manage our protests. Period. I don't know how many times I have to say that. However, December of last year we stood with Attorney General Barr ... and all the heads of the FBI, DEA, ATF, Marshalls and welcomed support. Welcome the support! A relentless pursuit. So as a lot of the cities are experiencing an uptick in violence, what they did is said, 'We're going to give you more. We're going to enhance what we're already doing.' So, we're hopeful - and this is the reason why it's important for me to talk about the number of guns we're taking off of criminals."

As for what Craig says he'd like to see happen next, he'd like to get the prosecutor's office enough manpower to handle appropriately charging the crimes.

"If we can get that done, we can start to see a real impact on the violence."