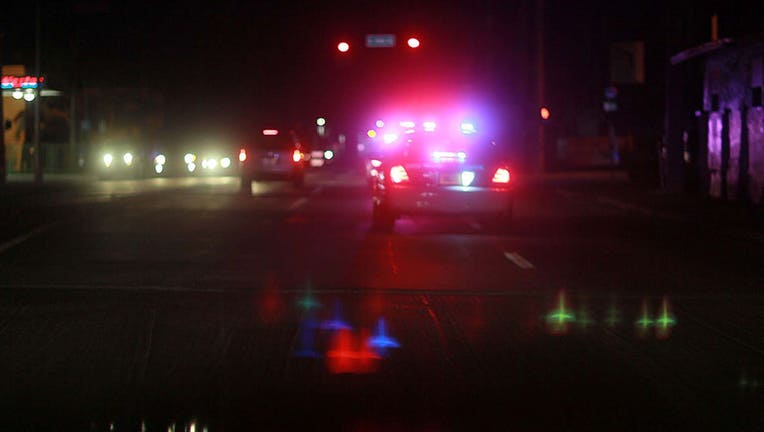 FILE - Police car with its lights on traveling down a street.

PORT HURON, Mich. - A Port Huron woman has died and her three children are in critical condition at area hospitals after her car crashed into a river on Nov. 30.

Corey Michelle Pratto, 26, died at McLaren Port Huron hospital after she allegedly drove through a parking lot and into the Black River. According to police, a 26-year-old male passenger jumped from the vehicle before it entered the water.

Pratto's three children, ages 6, 5, and 3, were rescued by local police dive teams and were taken to nearby hospitals, where they remain.

Police initially responded around 4 p.m. on Nov. 30 after the dispatch office received a call that a vehicle had driven through a parking lot off of Glenwood Avenue and into the water.

Officials said that two of the victims, females ages 6 and 3 years old, were taken to the University of Michigan hospital in Ann Arbor. The male victim, age 5, was taken to Children's hospital in Detroit.

The U.S. Coast Guard established a security zone in the Black River as the St. Clair County Dive Team and a local towing operation worked to remove the submerged vehicle from the river.

Both the St. Clair County Dive Team and the Port Huron Fire Department assisted in the recovery of the children and their mom.

Investigators spoke to the 26-year-old male passenger, Pratto's boyfriend, who told officers she was having problems with the car's brakes.

He said she was unable to stop the vehicle and he tried to shift the gear into park, but was unsuccessful and he jumped from the front passenger seat out of the moving vehicle before it crashed into the river because he cannot swim.

A gofundme for the kids has been set up and can be found here.