LIVONIA, Mich. (FOX 2) - Regina Daniel has been holding onto a stack of postcards since the 1980s.

"Those cards are over 120 years old, some of them," she said. Her brother found them at a home in Detroit off Heyden Street near 7 Mile.

A team of amateur detectives pulled their resources and found the family that owns a bundle of decades' old postcards.

"I tried to get in touch with the people and I didn't have any luck so what I did was I wrapped them all up and put them away and forgot about them," she admitted. But, last month Regina found them again and asked us for help.

Our FOX 2 viewers came through big time, linking Regina with Jim Dee and his wife, Patricia. They met at their favorite Livonia restaurant, Archie's.

"I have been holding onto those cards for a long time and finally the rightful owner has them," Regina said. "My heart was just pumping like wow I finally get to meet them."

"It's nice meeting Regina because she's a kindred spirit in terms of thinking enough to do something about returning these cards to someone that would find them of interest," Jim said.

The postcards all have the name O'Donovan with ties to Boston -- Jim says that's his mother's side. He speculates they were left behind when the family moved from their west side Detroit home. 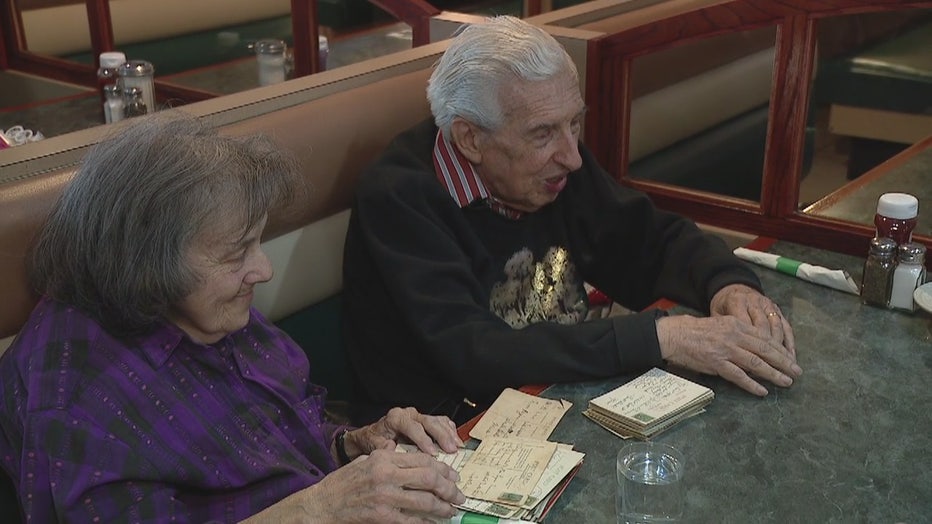 "So I assume that my mother had several nice pieces of furniture and probably in the drawers would have been [the postcards] that I had never seen," Jim said.

Since he got the call about these priceless heirlooms, it's been overwhelming for the 86 year old.

"When I told some of my friends they said, 'Oh, it's a scam,' and so forth. But I'm more of an optimist than a pessimist," he said.

This meeting never would have happened if it wasn't for a local woman who saw our story last month. This amateur historian started went digging, putting the pieces together to find out where these postcards belong.

"As I soon as the story was over I started doing research on them actually so it was pretty cool," said Angela Huskey.

A bit of a detective, Huskey said she had some time on her hands at her home in Capac in the thumb.

"I live in the country so there is not much to do up here," she said, jokingly.

She started on Ancestry.com, plugging in information from the postcards. But it all started coming together when she posted our story to a Facebook group, catching the attention of a Missing Persons Advocate who goes by Shay B. She's a pro.

They teamed up and within hours uncovered a mountain of information on Jim Dee and his family, all online. Angela made the call to Jim, delivering the news.

"I said, honey, I have I believe your - I believe it was his father's draft papers - tons and tons of history on that family," Huskey said.

Jim was able to connect the dots between the postcards and his family history on the web. It was a near-perfect match -- the postcards belong to him.

"I'm just happy we can get them home. I think it's an absolutely amazing piece of history for their family," Huskey said.

"This is a very happy ending, it is," Daniel said.

Jim and his wife are simply overjoyed, ready to get home and explore all those years in the past.

"I'm going to get a magnifying glass and good light on it and read all of it," Jim promised.