The Fourth of July often comes with grilling, laying by the lake, and basking in red, white, and blue. But for Julie Benda, it's an opportunity to hone her professional skill as stone skipper when she takes her talents to 2022 Stone Skipping tournament.

MACKINAC ISLAND, Mich. (FOX 2) - It might be her northern Great Lakes roots. Or maybe it was beginner's luck. Whatever was on Julie Benda's side the day she competed in an amateur stone skipping competition on Mackinac Island, it carried her to victory.

So why did she give up the trophy? Well Benda had bigger things on her mind.

"So that was the brief moment I had the trophy and then I had to hand it back so I could keep competing," she said, choosing to go pro instead of hold onto the trophy.

Now, the stone skipping expert will take her skills back to Mackinac Island for the 2022 tournament for the Fourth of July holiday. It's not a future she envisioned for herself growing up, but with the talent to bounce the stone dozens of times, how could she turn down the opportunity?

"I grew up on Lake Superior so I did a little of that," Benda said. "But I had been away from the lake for quite a few years and when I moved back I had a friend introduce me to stone skipping as a sport."

She then got offered to come see the competition.

"I looked at him and I scoffed. I said 'oh no. I am not going to watch you on Mackinac Island. If I go to Mackinac, I am competing," she said.

It was during that competition when she won and later passed on her trophy.

Now, with the world's best skippers arriving on the island, Benda will have the chance to take home first place. She'll be the only woman competing professionally - something she wishes would change.

"I don't feel pressure I think I'm just going to go have fun. There is some sadness because I really want more women representation. I don't want to be the only woman there," she said. 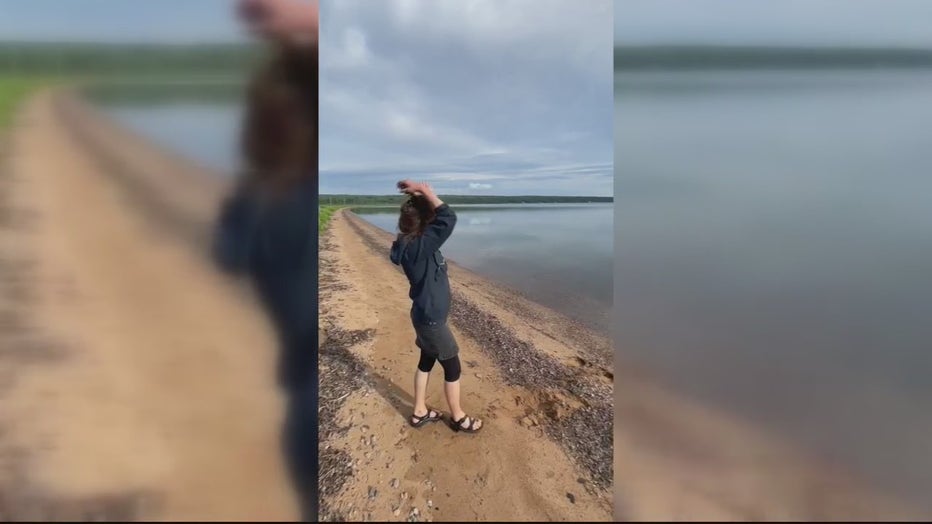 Benda is also an artist and a comic book author. A resident of Marquette, she has grown a cult following on TikTok for her skipping prowess.

Benda is also an artist and a comic book author. A resident of Marquette, she has grown a cult following on TikTok for her skipping prowess. The trick that helped her improve her technique was visualizing the stone hitting the water with a slight angle up.

It's helped her log a personal best of more than 30 skips on the water.

The professional invitation begins at 12 p.m.

Learn more about Benda and the work she does here.