WARREN, Mich. (FOX 2) - For the past five weeks at De La Salle a group of parents and others have been gathering here outside the school to hold a prayer service. Tuesday night the same parents, students and alumni turned that prayer into protest because they say no one else will listen to them.

The main reason 100 or so parents, students, and alumni were on De La Salle's campus Tuesday night was to support three students who haven’t been allowed at school for more than 40 days.

"They've been left out on the curbside like a pile of trash," said Craig Cole, the parent of a player.

Three students suspended for their alleged role in a hazing incident which has led to the school canceling the football season and now firing the coach. It has left parents looking to President John Knight and the school administrators, for answers.

The large group staged the protest because they don't feel anyone is listening to them.

"We haven't been in the loop. that's why families are here praying for the kids and praying for some peace," he said.

"The remedy is you have to remove john knight. and bring back Coach (Mike Giannone) back where he belongs," said Eric Gerling, a parent.

The school has not released details on why the football coach no longer works at De La Salle, or any comment on the lawsuit.

As for the hazing allegations, they have said in the past they have fully cooperated with the police investigation.

"We are about two months into it and if they really had some major issues or some damning evidence why wouldn't they present it already," Cole said. 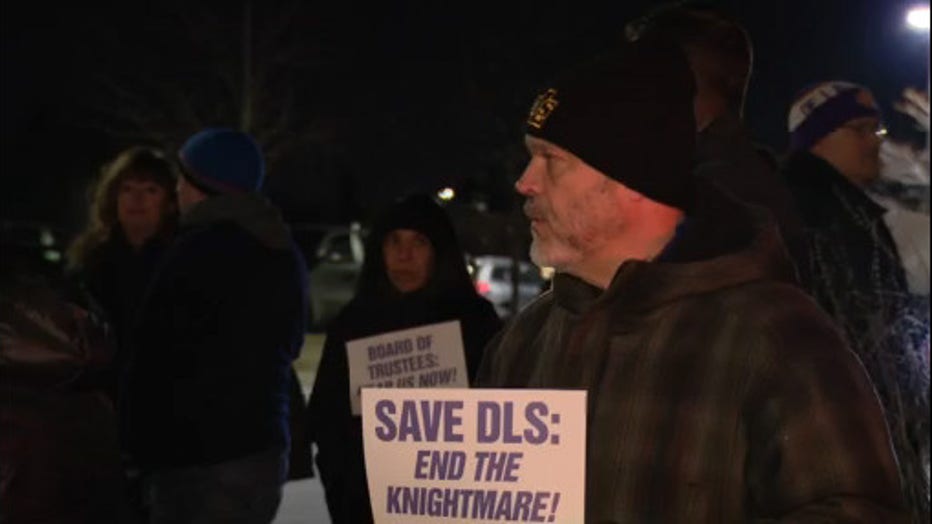 Today a student planned protest during school hours was thwarted by a reported bomb threat.  Parents are concerned this is all taking its toll on the kids’ education.

"They are depressed, they can't learn anymore," Cole said. "We saw what happened today with the so-called bomb threat."

"I was here for four years and I saw the progression to how it changed from family atmosphere to one where you were just a number," said Anthony Stull, who graduated in 2019.

As for what they want now, they say transparency - claiming the school board and president have been hiding behind words like investigation and lawsuit as reasons for their silence.

FOX 2 tried to reach President Knight by phone but he has not returned the call.

The spokesperson of the group, Cole, has a son who is a junior. He says if nothing changes he will likely be forced to find a new school for his children.