While evacuations are not mandatory, experts are advising people leave their homes for hotels and other places of residence after a gas leak from a nearby Ford plant allowed the chemical benzene to infiltrate the water system.

TUESDAY NEWS HIT - Families living in more than a thousand households in Flat Rock were advised to evacuate after a strange smell emitting from the city's sewer system last week raised concerns something more devious was lurking below.

The culprit was discovered to be benzene, which reportedly leaked from a pipe that moved gas to the nearby Ford plant, forcing a shutdown of operations at the facility.

Health officials are now working to isolate whether the chemical had sent any harmful vapors into any homes while families were offered hotel rooms as accommodations. United Way has also been onsite helping families.

"That helps a lot of the anxiety," said resident Tristan Shears, "knowing people are on foot doing what they can for our residents."

"We have people going from door-to-door knocking on residents' homes to not only share information in paper form but also giving them a warm, friendly person to ask questions," said Shelly Watts, United Way VP Southeastern Michigan.

Rewinding a bit, citizens from Flat Rock initially began talking about a strange odor early last week. Health officials and the city picked up on concerns a week ago on Tuesday morning when representatives from the EPA and Department of Environment, Great Lakes, and Energy showed up.

From there, further testing and canvassing helped isolate a perimeter that was later expanded. By Thursday night, a state of emergency had been announced by Wayne County and by Friday morning, evacuations had begun.

So far, families in more than 1,100 households have been advised to leave the area, but are not being required to leave.

That's a problem for some families with pets. United Way has also struggled to get in touch with other families that were up north for the holiday weekend.

"A lot of people are up north right now and we are happy people are enjoying their labor day weekend," said Watts. "But it’s also making our canvassing difficult, because more people who can come down here to volunteer and canvas, the quicker we can spread information to residents."

The guidance is indefinite as health officials are working to find if Benzene, a carcinogen, had infiltrated anyone's room. Described as a colorless or light yellow liquid at room temperature, it is highly flammable and evaporates really quickly.

Usually a byproduct of oil, gas, and cigarette smoke, it's a common chemical used in manufacturing. It's also known to cause symptoms like drowsiness, dizziness, headaches, confusion, and death at very high levels.

Residents have been advised to go to the Flat Rock high school for assistance. They can also call 211.

The emergency has also forced the cancelation of Riverfest, which was scheduled for next weekend.

Police shut down eastbound I-96 after a shooting that took place near Greenfield Monday afternoon. According to law enforcement, a 25-year-old man from Novi had been targeted in the incident.

The Detroit Regional Communication Center originally contacted Detroit police after a vehicle was spotted on the expressway with bullet holes. The driver was transported to a local hospital where he was pronounced dead.

Michigan State Police say the shooting did not appear random.

Michigan State Police are investigating the fatal shooting of a Novi man on I-96 in Detroit near Greenfield on Labor Day.

The federal programs that had been bolstering unemployment filings for residents struggling through the pandemic after ended, leaving some 440,000 Michigan citizens with less cash assistance than before.

That could spell problems since the state's unemployment rate remains higher than it did prior to the pandemic. While the state can't offer more money somewhere else, it has set up multiple resources to help people find jobs and get career help.

The U.S. has hit its September deadline for additional unemployment benefits, meaning the extra financing that came with filing for jobless aid will cease. Here's what that means in the context of a still-raging pandemic.

Both Pure Michigan Talent Connect and Michigan Works offer a means of finding a job or getting a career, interview, and application advice. Find more information about them here.

The state has also set up a network to help with housing instability after the Supreme Court ended the CDC's eviction moratorium. Eligible renters can check if they have resources available at Michigan.gov/cera.

More than 20,000 people participated Monday in the Labor Day walk on the Mackinac Bridge, an annual event that was canceled last year for the first time because of COVID-19.

"Although total participation is less than we’ve had in recent years, there were still thousands of very happy faces on the bridge, all glad to revive this tradition," said Kim Nowack, director of the Mackinac Bridge Authority.

The 2020 cancellation was the first since the walk began in 1958. They could walk the entire bridge, walk to the middle and return to St. Ignace or Mackinaw City or make a 10-mile round trip. 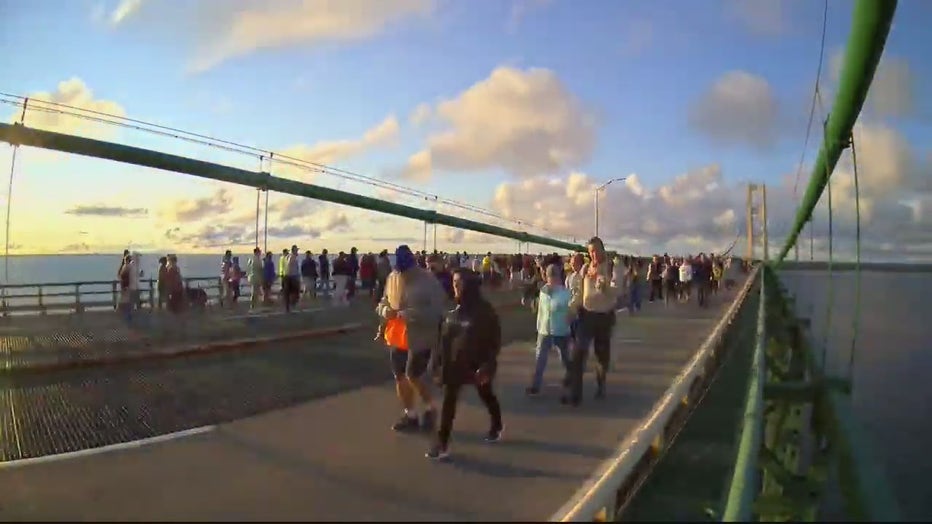 Dogs can be put to death after horse attack, Michigan court rules

Two dogs blamed for an attack on a horse in the northern Lower Peninsula can be put to death, the Michigan Court of Appeals said. The horse was attacked in a barn in Presque Isle County in 2019. The injuries were so severe that the owner decided to euthanize the horse.

Two American bulldogs ran off while their owner was raking leaves. Hours later, Charles Kendziorski went to his barn and found the dogs covered in blood near his badly injured horse. "There was no evidence presented that any other animals had been in the barn with the horse," judges Jane Beckering and Mark Boonstra said in a 2-1 opinion last week. "Given this evidence, a reasonable fact-finder could conclude that defendant’s dogs had attacked the horse."

They affirmed a lower court decision to euthanize the dogs. In dissent, Judge Amy Ronayne Krause said she wasn’t entirely convinced. She said the dogs might have fought off a wild animal that had attacked the horse.

If the dogs could enter the barn, "then they were not the only animals capable of doing so," Ronayne Krause said. Killing the dogs would be an "unprincipled and excessive outcome," she said, noting they could instead be confined to their home.

Some of the familiar summer heat we were used to earlier this year will return today with temperatures rising into the 80s. Storms are expected Tuesday night and might turn severe with high wind speeds possible in some areas.

Severe weather is possible late this afternoon and evening.

Millions of jobless Americans lost their unemployment benefits on Monday, leaving only a handful of economic support programs for those who are still being hit financially by the year-and-a-half-old coronavirus pandemic.

Two critical programs expired on Monday. One provided jobless aid to self-employed and gig workers and another provided benefits to those who have been unemployed more than six months. Further, the Biden administration's $300 weekly supplemental unemployment benefit also ran out on Monday.

It's estimated that roughly 8.9 million Americans will lose all or some of these benefits.

While the White House has encouraged states to keep paying the $300 weekly benefit by using money from the stimulus bills, no states have opted to do so. Many states even opted out of the federal program early after some businesses complained that they couldn’t find enough people to hire. The data have shown minimal economic benefits from cutting off aid early in those states.