Farmington Hills fire crews were called to an early morning house fire on reports that a woman was trapped on the second floor hanging out a window - screaming for help.

FARMINGTON HILLS, Mich. (FOX 2) - Fire crews were called to an early morning house fire on reports that a 62-year-old woman was trapped on the second floor hanging out a window - screaming for help.

"We kept her calm, we pulled her out of the window, we kind of got her down the ladder between me and my partner - and got her onto the stretcher," said Blanch, sr. firefighter paramedic.

This all happened in the 21300 block of  Waldron Street near Grand River.

"She had soot on her from the smoke, there was a lot of smoke, she was coughing so obviously she had some smoke inhalation," said Geffert.

"She never went unconscious the whole time," said Blanch. "We just kept telling him we were there with her."

"She was out on the ground, I was glad she was talking," said Geffert  "But the job still wasn't done. When you are in that situation, it's always the next step."

She was taken to an area hospital and then later transported to a burn unit.

Even after the rescue, both Blanch and Geffert were part of a 16-member fire response effort that battled the fire before putting it out.

The two people who saved the woman's life spoke to us about what happened a little over twelve hours later.

"In my very short career this definitely ranks up there," Geffert said. "When you get to a scene like that, and there's a life at risk, your mind kind of goes into autopilot. And that’s where we rely on our training."

It’s not something that happens every day, but their constant preparation had them ready.

"For me it’s my job - I’m here, I’m here to make a difference, I’m here to change lives," Blanch said. "Sixteen years and that is still what (I) want to do."

"It’s hard to here the word hero like Manndez said, we’re just doing our job," Geffert said. "This is what we are trained to do."

"I know every other firefighter out there would have done the same thing," Blanch said. "This is what we do, without thinking about it, we put our lives in jeopardy to save someone else’s."

And when it was over and they had a minute to catch their breath back at the fire station.

"As a newer firefighter I look up to Manndez a lot, I think he’s a great leader," Geffert said.

"I wouldn’t have wanted to do this with anybody else but her," Blanch said. 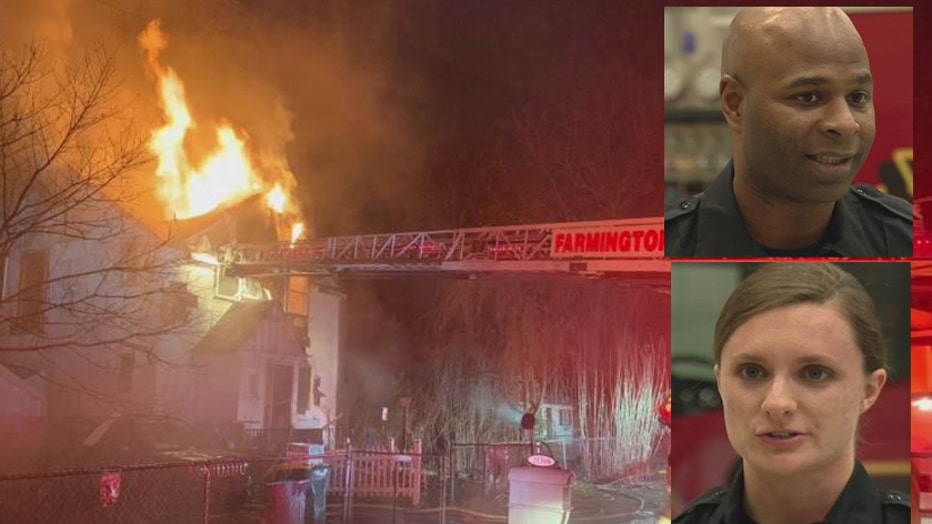