FOX 2 - President Donald Trump struck a subdued but defiant tone saying Democrats are trying to rig the election. He took shots at the ballot tabulating process in Democratic-run cities like Detroit, in battleground states too close to call in a press conference Thursday night.

Detroit did not escape Trump's wrath as he attacked the process of ballot counting at the TCF Center. Trump currently trails challenger Joe Biden 264-214 in the race to 270 electoral votes although the former VP's projected win of Arizona has been debated.

Detroit ballot counting from the 2020 election was blasted by President Trump tonight, leaving many saying the lack of evidence was upsetting.

"Detroit and Philadelphia are known as two of the most corrupt political places anywhere in our country - easily. They cannot be responsible for engineering the outcome of a presidential race," he said. "Our campaign has been denied access from doing any counting in Detroit. Detroit is another place and I would not say it has the best reputation for election integrity. Poll workers in Michigan were duplicating ballots.

"But when our observers attempted to challenge the activity the poll workers jumped in front of the volunteers to block their view so they couldn't see what they were doing. And, it became a little bit dangerous." 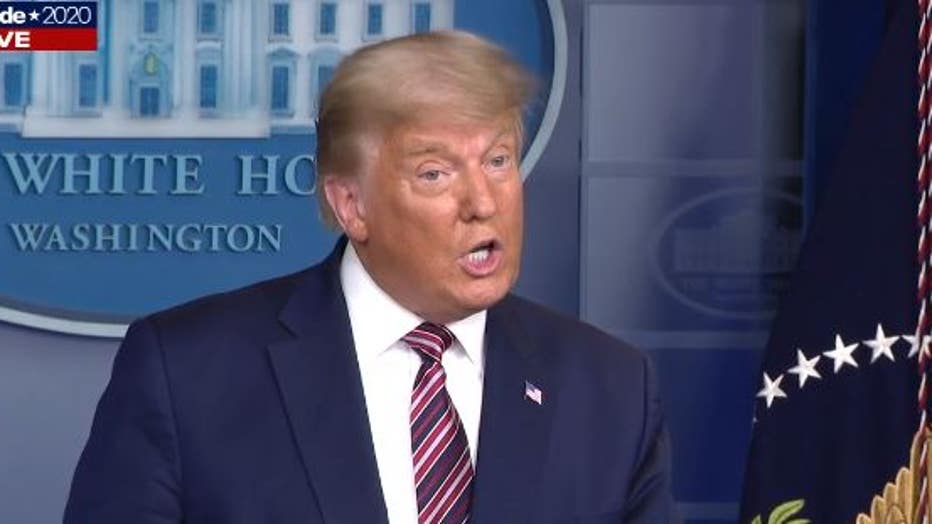 Trump also brought up the placing of cardboard on windows when protesters and counter-protesters were riled and chanting outside the TCF Center Wednesday. Chants of "Count every vote" was heard outside.

Inside, a few Republican watchers were escorted out to applause inside the counting area Wednesday night according to FOX News' Kevin Corke. It is not known why they were ejected, but watchers from both parties, which is permissible and legal, were on-site.

"One major hub for counting ballots in Detroit covered up the windows with large pieces of cardboard they wanted to protect and black the counting area," he said. "They didn't want anyone to see the counting area - even though they were legal observers who were supposed to be there."

Trump made allegations that the election was being stolen and that it can't be allowed to happen, referring to large counts of Biden selected mail-in ballots that have gobbled up his leads in various states.

"In Detroit, there were hours of unexplained delay in delivering many of the votes for counting. The final batch did not arrive until four in the morning, even though the polls closed at 8 o'clock," he said. "So they brought it in, the batches came in, and nobody knew where they came from."

It is an unsubstantiated claim that ballots came in late. In one since debunked instance, late-night video of a white van outside TCF dropping off a delivery that made the rounds online was actually another TV station delivering equipment during a shift change.

Secretary of State Jocelyn Benson's spoke Wednesday about the state's effort managing the election touting its accuracy and integrity of the ballot counting process. She also issued a word of warning.

"Our system is secure, accurate, and anyone who tells you otherwise is attacking our Democracy or unhappy with the results," Benson said.

Biden made remarks Thursday and pleaded for patience as every vote is counted.

Benson has said some protesters may have been emboldened to gather outside the TCF Center because of Trump's previous comments criticizing the mail-in process. She added that she questioned whether it was staged to disrupt the process.

"I will just say if they thought they were going to intimidate or stop anyone from doing their job inside the TCF Center - then they don't know Detroit," Benson said. "Pushback against the misinformation we believe will escalate in the days ahead and respect the will of the voters. And bring our country and our state together."

"There had something wrong that they felt would not go through the machine and they were taking the ballots out of the box and they were hand-copying them onto another ballot," she said. "I challenged that. I asked that I would like to compare the two and they would not let me compare them."

"It's human error, it's old people in there," LeDuff said. "They locked us away for 16 hours. You're going to make one error, it's not mass fraud."

Canvassing the vote will take place in a bi-partisan effort over the next 13 days to certify the election.

Stay with FOX 2 as more election results continue to come in.