DETROIT (FOX 2) - UAW-GM Vice President Terry Dittes notes that day 21 of the UAW strike has “taken a turn for the worst,” as General Motors rejected another proposal that was issued on Saturday, October 5, 2019.

The UAW strike will enter its fourth week starting Monday.

A letter from UAW Vice President Terry Dittes, which you can read in full below, casts doubt on whether there will be a quick settlement in the contract dispute, which sent 49,000 workers to the picket lines on Sept. 16, crippling GM's factories. 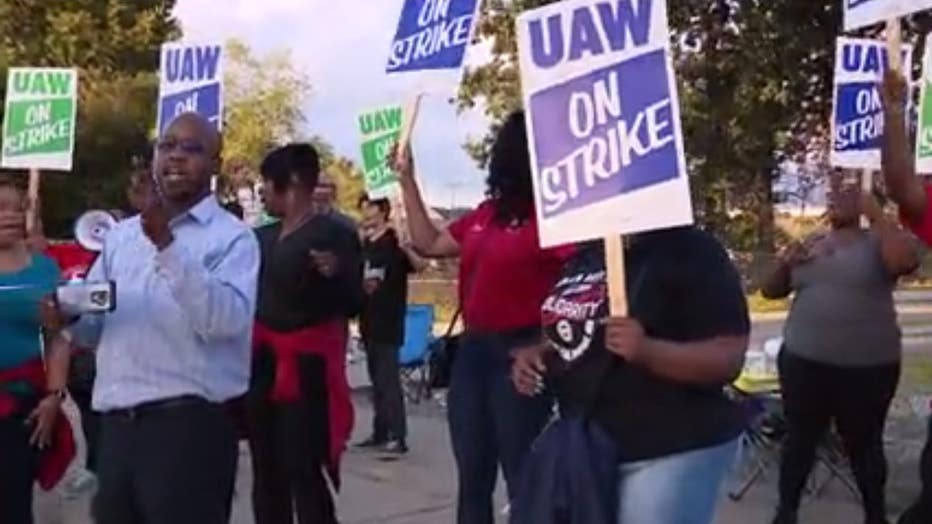 Dittes' letter says the union presented a proposal to the company Saturday. He said GM responded Sunday morning by reverting back to an offer that had been rejected and made few changes.

The company's proposal did nothing to address a host of items, Dittes wrote, specifying job security for members during the term of the four-year contract.

GM's U.S. factories have been shut down since the workers walked out Sept. 16. Parts shortages also have forced the company to close plants in Mexico and Canada.

Industry analysts say GM is losing more than $80 million a day as the strike continues. Workers earn $250 per week in strike pay while they're on the picket lines, about one-fifth of what they normally make. Wages and pensions are among the issues that remained unsettled.

Striking workers have said they want a bigger share of the more than $30 billion in profits that GM has made during the past five years. But the company wants to cut its labor costs so they are closer to those at U.S. factories run by foreign automakers, mainly in the South.

Read the full letter below issued by UAW-GM Vice President.

06 Oct 2019
Update from UAW-GM Vice President Terry Dittes
RE: UAW-GM Negotiations Update #5 (URGENT)
Dear Union Brothers and Sisters:
On Saturday, October 5, 2019, your Bargaining Committee, along with the UAW International Staff, prepared an extensive package proposal and presented it to the Company at 5:35 pm. Our proposal addressed issues of wages, signing bonus, job security, pensions, skilled trades, profit sharing, transfer rights; to name just a few.
This morning, Sunday, October 6, 2019 at 9:05 am, GM provided a response. The Company's response did not address our extensive package provided last evening. They reverted back to their last rejected proposal and made little change. The Company's response did nothing to advance a whole host of issues that are important to you and your families! It did nothing to provide job security during the term of this Agreement.
We, in this Union, could not be more disappointed with General Motors who refuse to recognize the experience and talent of our Membership who make their world class products and billions of dollars in profits.
Brothers and Sisters, after making some progress on important issues a couple days ago, the Company has shown an unwillingness to fairly compensate the great workforce of the UAW.
These negotiations have taken a turn for the worse. Your issues are our issues, and our strength is with you, our great Membership. We will continue to negotiate on behalf of you, your families and all workers in our country.
In solidarity,
Terry DittesVice President and DirectorUAW General Motors Department