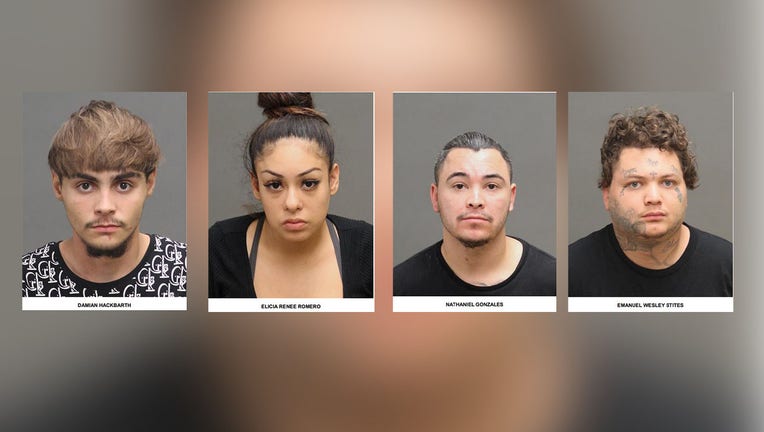 BLOOMFIELD TOWNSHIP, Mich. (FOX 2) - Four suspects were arrested following a high speed chase that ended in a crash in Troy. The individuals had been at a Bloomfield Township residence breaking into the home when police came upon the robbery.

Police had gotten a call from the homeowner who saw the thieves on their home surveillance camera and responded to the residence while the suspects were in the act. As they approached the home, an individual was seen running from the home toward a van parked outside the address. He ignored orders to stop and instead entered the van, which then sped from the police.

The scene unfolded on Sept. 19 around 11:20 a.m. in Bloomfield Township. It happened in the 200 block of Harrow Circle.

The victim was out of the country when he got an alert of a suspicious person at their front door. According to a review of the surveillance footage, one of the lone female suspect Elicia Renee Romero had gone to the front door and knocked to determine if anyone was home.

About five minutes later, Nathaniel Gonzales and Damian Hackbarth had walked to the backyard and used a landscape block to smash open a door. Police arrived shortly after and observed a gold Astro Van with an improper license plate parked next to another property.

As one officer approached the van, they saw an individual running from the victim's home. The suspect failed to obey orders from police to stop.

Instead, the subject got into the van and fled the scene. He reportedly dropped a plastic basket carrying medications later determined to be the victims. Another subject was also seen running from the home, before losing sight of him.

Bloomfield Township Police later attempted a traffic stop on the van, but were unsuccessful. Instead, it fled at a high rate of speed, crossing into on-coming traffic. Officers terminated the pursuit due to dangerous conditions.

However, they did call ahead to Troy which later located the vehicle and initiated a pursuit. The van later lost control in an industrial park and came to rest against a fence. Inside the van was Emanuel Wesley Stites, the gettawy driver. Romero, Hackbarth, and Nathaniel Gonzales were also spotted in the van, along with an unrestrained 2-year-old.

Police believe the child was the daughter of Gonzales.

While investigating the vehicle, police found three firearms, including one that was listed as stolen last year in Colorado. Police also found four key fobs and a purse believed to have been taken during a different home invasion in Bloomfield Township.

All four suspects were arraigned on September 22, 2022 at the 48th District Court and are currently at the Oakland County Jail: