Evacuee Afghan children play with US soldiers in Texas

Afghan children at the US Army’s Fort Bliss played with soldiers on September 10, footage published by DVIDS shows. (Credit: DVIDS via Storyful)

EL PASO, Texas - Afghan children are seen playing with soldiers at the U.S. Army’s Fort Bliss in Texas, in a newly released video published by DVIDS.

The footage, published on Wednesday, shows children playing with soccer and basketballs with the service members. One child is seen doing a handshake with a soldier, and another child is seen unwrapping some candy.

According to local media, the children are among almost 10,000 evacuees housed at the fort’s Dona Ana Complex.

The Department of Defense "is providing transportation, temporary housing, medical screening, and general support for at least 50,000 Afghan evacuees at suitable facilities," according to the DVIDS website. 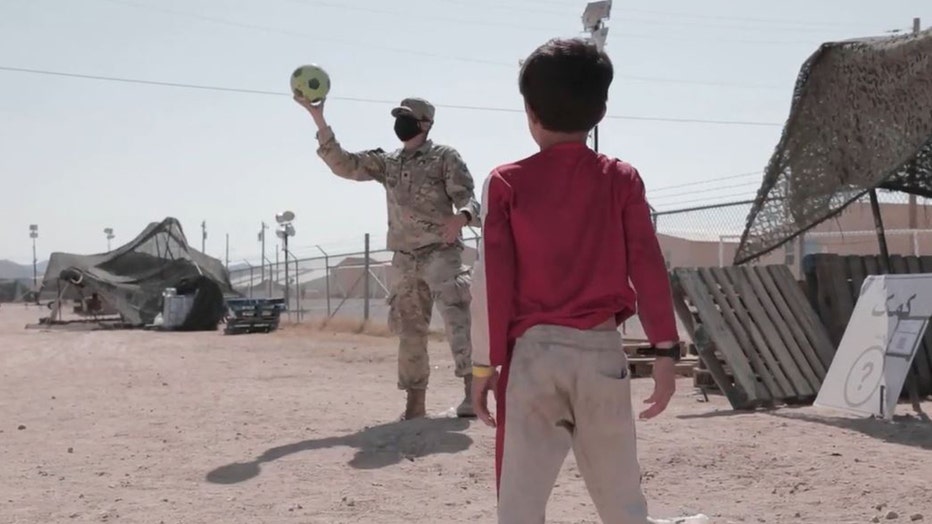 The Biden administration has requested funding from Congress to help resettle 65,000 Afghans in the United States by the end of this month and 95,000 by September 2022.

States with a historically large number of Afghans who resettled in the U.S. over the last 20 years — including California, Maryland, Texas and Virginia — are again welcoming a disproportionate number of evacuees, according to the data.

The Afghan evacuees go through a Department of Homeland Security-coordinated process of security vetting before being admitted. And every evacuee who comes into the United States also goes through health screening. Evacuees who are 12 and older are required to get the COVID-19 vaccination as a term of their humanitarian parolee status after entering the country.

Last week, the U.S. Department of State announced more than 124,000 Afghans and 6,000 U.S. citizens were successfully evacuated out of Afghanistan.

"The United States mobilized an unprecedented, global effort through our diplomatic channels to evacuate U.S. citizens, personnel from partner nations, and at-risk Afghans from Kabul," according to a State Department news release.

Storyful and the Associated Press contributed to this story. This story was reported from Los Angeles.