A combination of physical activity, not smoking, light alcohol consumption, a good diet and cognitive activities may help lower the risk of the disease by as much as 60 percent, a study found.

CLEVELAND, Ohio - A new study shows that drugs commonly used to treat erectile dysfunction, such as Viagra, may reduce a person’s risk of developing Alzheimer's disease by up to two-thirds.

According to the study, supported by the National Institutes of Health and published in "Naturing Aging" earlier this month, people who took the drug sildenafil (also known by brand names including Viagra and Revatio) were less likely to develop Alzheimer’s disease.

Sildenafil is FDA-approved to treat erectile dysfunction and pulmonary hypertension.

A team of researchers, led by Dr. Feixiong Cheng at the Cleveland Clinic, analyzed data on more than 7 million U.S. adults, looking at whether any of 1,600 approved drugs could be repurposed to tackle the underlying causes of the brain-destroying disease. 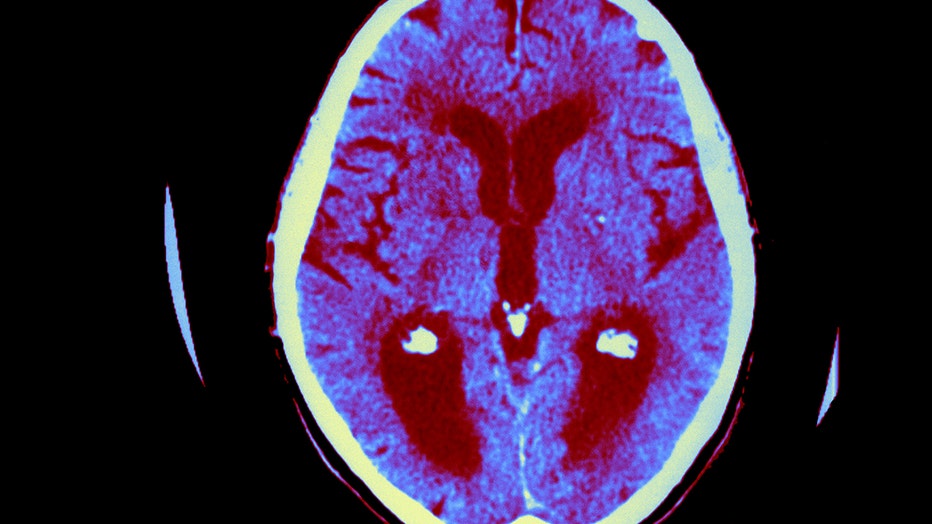 Axial Cut Away View. Median Portion Of Dilated Third Ventricle. Symettrical Dilation Of Intersections, Whereas The Cortical Horns Are Normal In Size. (Photo By BSIP/UIG Via Getty Images)

Researchers found regular users had a 69% lower chance of being diagnosed with Alzheimer’s over the next six years.

"Based on retrospective case–control pharmacoepidemiologic analyses of insurance claims data for 7.23 million individuals, we found that sildenafil usage was significantly associated with a 69% reduced risk of AD [Alzheimer’s disease]," the study authors wrote.

But, researchers emphasize that the study does not show that sildenafil prevents or reverses Alzheimer’s. There may be other factors responsible for the association, and this will need more research.

"Because our findings only establish an association between sildenafil use and reduced incidence of Alzheimer’s disease, we are now planning a mechanistic trial and a phase II randomized clinical trial to test causality and confirm sildenafil’s clinical benefits for Alzheimer’s patients," Cheng explained in NIH’s press release.

Alzheimer’s disease is the most common form of dementia. It is expected to affect 16 million Americans by 2050, according to the NIH.

"This is one of many efforts we are supporting to find existing drugs or available safe compounds for other conditions that would be good candidates for Alzheimer’s disease clinical trials," said Dr. Jean Yuan, a program director at the National Institute on Aging.

In June, government health officials approved the first new drug for Alzheimer’s disease in nearly 20 years, disregarding warnings from independent advisers that the much-debated treatment hasn’t been shown to help slow the illness.The Food and Drug Administration said it granted approval to the drug developed by Biogen for patients with Alzheimer's disease.

It’s the only drug that U.S. regulators have said can likely treat the underlying disease, rather than manage symptoms like anxiety and insomnia.

The new drug, which Biogen developed with Japan’s Eisai Co., did not reverse mental decline but slowed it down, according to one study. The drug is given as an infusion every four weeks.

The FDA is requiring the drugmaker to conduct a follow-up study to confirm the drug’s benefits for patients. If the study fails to show effectiveness, the FDA could pull the drug from the market.

Biogen did not immediately disclose the price, though analysts have estimated the drug could cost between $30,000 and $50,000 for a year's worth of treatment.

This story was reported from Los Angeles. The Associated Press contributed to this story.