What happens when national politics seeps into local discourse? For a high school coach/teacher and a school board president, nothing good. In brief combustible scenarios that reached their climax on Tuesday, it was social media that led to the removal of Northville's school board executive and Walled Lake's baseball coach.

In microcosms that fit all too perfectly into the left-or-right politics that many Americans now find themselves choosing, both individuals expressed opinions online that led to a backlash from their respective digital circles, before eventually reaching administrators and board members. Despite the nuances of each story, the outcomes were relatively similar.

We'll start in Walled Lake. Justin Kucera had just pushed out a post on Twitter supporting President Donald Trump. He wrote "I'm done being silent. @realDonaldTrump is our president Don't @ me". The social studies teacher and baseball coach at Walled Lake Western High School said he first received a lot of backlash from "the Twitter mob" but felt a lot of people were rooting against the president. "I just felt like we should be rooting for him to succeed."

He also retweeted a post from the president in which Trump wrote "SCHOOLS MUST OPEN IN THE FALL!!!"

Shortly after the tweet went out, Kucera received a call to meet with school administrators.

"They also asked me about the retweet of President Trump's tweet that said schools must open in the fall," Kucera said. "I chose not to resign, they chose to fire me."

I chose not to resign, they chose to fire me, he said.

In interviews with parents and recent graduates, people did express concern for Kucera. One said they felt bad for him while another called the incident not "that big" and said there were other things people should get in trouble for at the district.

In a statement from the district denied any connection to Kucera's firing and endorsement for the president. "Please know that no disciplinary action was taken as a result of any support of President Trump and we are unable to comment on specific staff discipline and personal matters."

About 12 miles south in Northville, a different backlash was brewing beyond the online spheres. Over the weekend, Matt Wilk shared a post on his Facebook that questioned the severity of the coronavirus and asked "where are the videos of panic in the hospitals?" before answering "They don't exist."

"This 'Pandemic' exists only in falsified statistics shouted on the news without context." The share, which originated in a pro-Trump social media account, led to widespread criticism of Wilk, who serves as the Board President of the Northville School District. One of Wilk's critics asked about showing the post to the school board so they could "know what you REALLY think about masks for kids and teachers."

Wilk responded "How about we allow schools to reopen and Grandma can take the extreme precautions? She can wear a spacesuit when she "needs" to go out and shop, and the rest of the world can go about their lives, instead of shutting everything down because she might get sick."

The added commentary did little to quell emotions regarding the tension. An alumnus of the school set up a petition calling for Wilk's removal. The president of the PTA at an elementary school expressed her concern online. Members of the board also chastised the president for his online phrasing, which comes amid conversations within districts trying to balance reopening schools and maintaining public health. 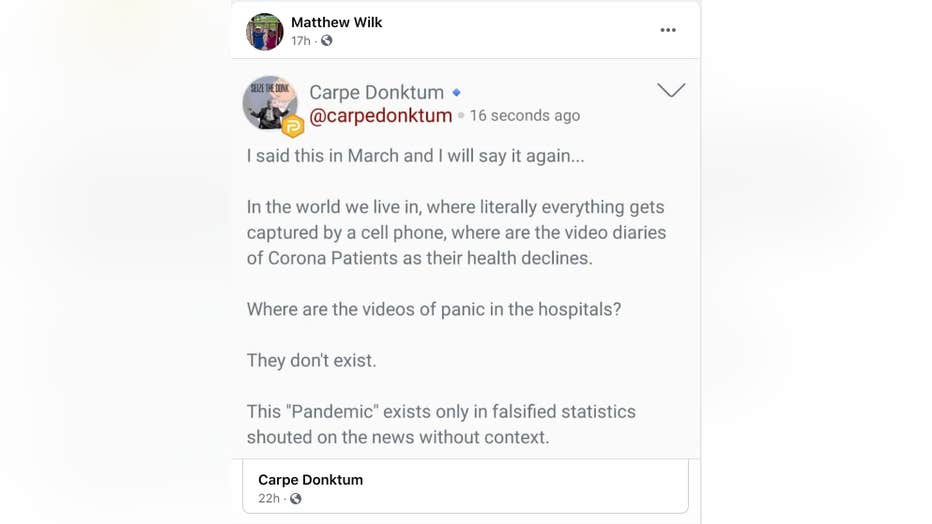 During a Tuesday school board meeting, board members voted to remove Wilk as president, remove him of all committee assignments, and be censured from the board. He offered this as a response:

"I probably should have followed my kids’ own rules to on the internet: everything you say will be twisted, misconstrued and taken out of context. It’s just the way things are in 2020. I’ve been the staunchest proponent of getting our kids back in school in the fall. Even the Governor thinks it can be done safely. I think the offense really ought to be directed at the ideas, not the messenger. I thank the hundreds of parents who sent me messages of support."

A federal judge ruled Tuesday that summer classes in Detroit public schools can continue but students must be tested for COVID-19, first.

Last week, students and teachers returned to classes at Detroit Public Schools Community District, and the busses that were to leave to pick up the students were met with protesters demanding the schools be closed.

By Any Means Necessary (BAMN) fought to shut down schools, saying that students weren't safe from the virus. They filed a lawsuit and, on Tuesday, they claimed victory in the fight when U.S. District Judge Arthur Tarnow said schools can continue but with testing in place.

The district said there is no legal authority to require testing and warned attempts to test create unfairness and are likely to be unsuccessful. However, the district's superintendent said while they opposed the judge's order, they will comply with the order.

A judge has ruled that summer school in Detroit can continue but students must be tested for COVID-19.

This latest act in the saga of summer school in Detroit comes following weeks of lawsuits and protests that disrupted DPSCD buses from leaving their terminals.

Detroit Police have charged a 25-year-old man with three first degree murder charges after he killed three in a quadruple shooting at a coney island Sunday night.

Mickey Dane Douglas was charged in the killings, also receiving one count of Assault with Intent to Murder, one count of a Felon in Possession of a Firearm, and five counts of Felony Firearm.

Douglas's arrest came the morning after the shooting when the Detroit police chief said the suspect had an extensive criminal history. However, it's unclear what prompted the killings. While staff at the Eagles Coney Island said they didn't hear any argument or fighting prior to the gunshots, Chief James Craig said it appeared the suspect had a brief conversation with one of the victims before pulling a gun on them.

A suspect with a criminal background has been charged in a deadly mass shooting of 4 people in Detroit.

A heavy police presence outside a west Detroit neighborhood is looking into the fatal shooting of a 30-year-old man found in a vehicle that had crashed.

At approximately 3:20 p.m. officers responded to a male victim found with a gunshot wound in his Jeep Cherokee. That Jeep had also struck a home, however, no one inside was injured.

Taking place in the 15700 Block of Dexter Road near Livernois, neighbors report hearing gunshots in the area. A review of footage also notes a broken rear window possible shot out.

Detroit police are investigating a scene on the 15700 Block of Dexter near Livernois where they found a 30-year-old man dead with a gunshot wound in a Jeep. The vehicle had crashed into the side of a home. Police later arrested someone whose connection to the case is unknown.

It's unsure how the shooting and the crash are connected, but around 6:30 a.m. with police still on scene, they eventually handcuffed a man and placed him in the back of a squad vehicle. It's unclear what connection he has to the scene, which police have been investigating for hours now.

Midweek weather expected to be wet before temperatures climb over the weekend.

Some midweek wet weather with our weekend warm up is still on track.

Temps near 90 for the weekend!

Twitter says it will be taking strong enforcement action on behavior that has the potential to lead to offline harm, including action on “QAnon” activity — a conspiracy theory popular among right-wing extremists.

Twitter announced on Tuesday that it will permanently suspend accounts tweeting about the QAnon conspiracy theory if the user is engaging in violations of Twitter’s account policy.

“We will permanently suspend accounts Tweeting about these topics that we know are engaged in violations of our multi-account policy, coordinating abuse around individual victims, or are attempting to evade a previous suspension — something we’ve seen more of in recent weeks,” Twitter’s Safety account tweeted.