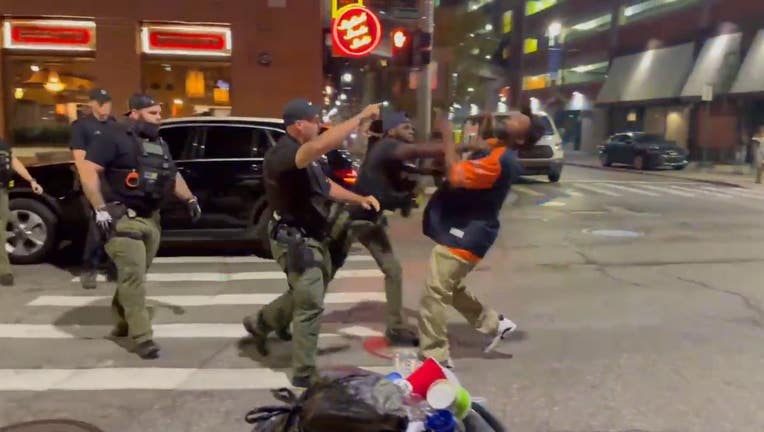 DETROIT (FOX 2) - The Detroit cop caught on camera punching a man in the face will not be charged by the county prosecutor.

Detroit police had suspended the officer after the punch, which happened in Greektown in August 2021. A video of the incident showed the unnamed cop approaching a man who was walking backward, and slugging him in the face.

Chief James White said the incident was "unacceptable" and gave him "great concern" after seeing it, leading to the officer's suspension.

The Wayne County Prosecutor declined to charge the officer, citing context before the clip showed the man who was punched attempting to interfere or obstruct an arrest. The decision was made on Jan. 14.

According to a statement from the prosecutor's office, as police were arresting someone, the man who is identified as Man A, was recorded on video yelling and lunging at officers. He appeared to be intoxicated and uncontrollable.

A friend of Man A could not calm him down or physically remove him "despite being much larger than Man A."

The Detroit Police Officer who punched a man in Greektown has been suspended with pay as the department investigates. Interim Police Chief James White said the incident was unacceptable.

After an officer physically walked Man A away from the scene, he fell to the ground, then got back up and "continued his adversarial demeanor." The officer punched the individual after this interaction, before helping him back up.

"In this context, the police officer punched Man A once in the face, helped him up, then retreated to a safer position from an increasingly unruly crowd."

The prosecutor's statement said there was "insufficient evidence to show any wrongdoing" and that the officer was "acting in defense of others."