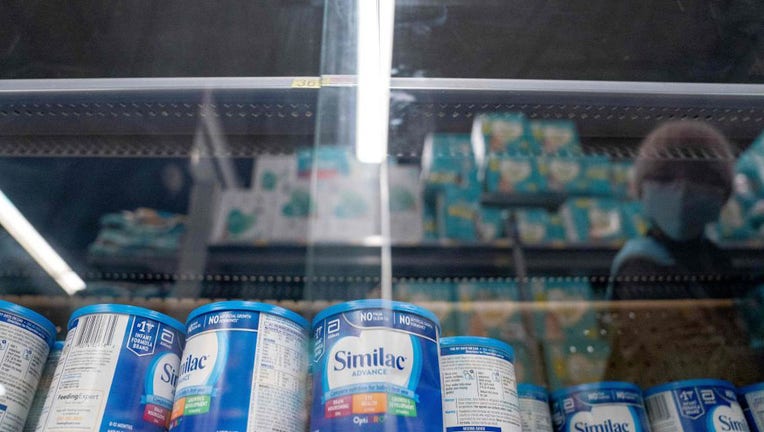 A shopper is reflected in a glass case while looking at baby formula at a grocery store in Washington, DC, on May 11, 2022. (STEFANI REYNOLDS/AFP via Getty Images)

The formula, weighing 78,000 pounds (35,380 kilograms), is being transported by military plane, Jean-Pierre told reporters aboard Air Force One as President Joe Biden flew from South Korea to Japan.

Agriculture Secretary Tom Vilsack is expected to greet the arrival of the first shipment in Indianapolis.

The Biden administration — which has struggled to address a nationwide shortage of formula, particularly hypoallergenic varieties — has dubbed the effort "Operation Fly Formula."

The White House has said 132 pallets of Nestlé Health Science Alfamino Infant and Alfamino Junior formula was to leave Ramstein Air Base in Germany for the U.S. Another 114 pallets of Gerber Good Start Extensive HA formula were expected to arrive in the coming days. Altogether, about 1.5 million 8-ounce bottles of the three formulas, which are hypoallergenic for children with cow’s milk protein allergy, are expected to arrive this week.

Indianapolis was chosen because it is a Nestle distribution hub. The formula will be offloaded into FedEx semitractor-trailers and taken to a Nestle distribution center about a mile away where the company will do a standard quality control check before distributing the supplies to hospitals, pharmacies and doctor’s offices, according to an administration official on site.

Air Force planes are transporting the initial batch of formula because no commercial flights were available this weekend.

Under "Operation Fly Formula," the Department of Agriculture and the Department of Health and Human Services are authorized to request Department of Defense support to pick up overseas infant formula that meets U.S. health and safety standards, so it can get to store shelves faster, according to the USDA.

Alfamino is primarily available through hospitals and home health care companies that serve patients at home.